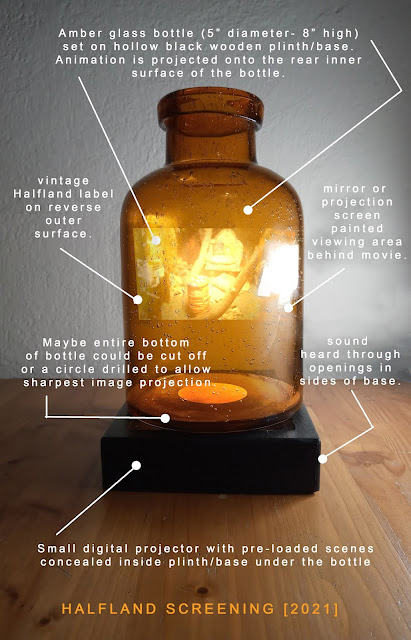 ©2021 Here's a mock-up of my intended final form for viewing finished Halfland animations.

It's an art object. A small version of the scenes play out inside the bottle for viewing. The scenes are brief and compose chapter series of the story. The small digital projector hidden inside the base can play for about 2 hours per charge. And any new series releases can be downloaded from a future Halfland site so your glass bottle theater stays up to date with the whole tale.

It's as though Halfland is real but taking place somewhere else. You can view it as if by dreaming, slightly removed, captured.

There. Now you know exactly what's inside my mind.

Hoping everyone is staying well. 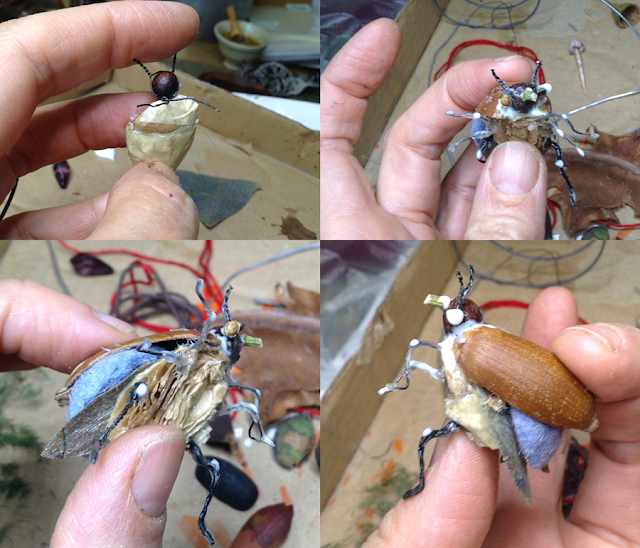 My dear friend, Shari asked me in 2016 for something just laying around extra from Halfland as her birthday present. I can't believe this is the first time I'm getting to tell you about it.

Of course, nothing much is laying around extra in Halfland so I made her a little Halflandian-style birthday beetle just for her.

It's a bug that would fit right into the Halfland bug party but is kept at Shari's house as a keepsake from her "unusual" friend. It's always fun to make these bugs!

I made a base of earth from painted sponge and railroad grass, sat the beetle on a velvet leaf with a mushroom ice-cream cone, all under a small glass dome.
Posted by Shelley Noble at 10:57 PM No comments:

Catching Up: The Quiet Girl Is Gone 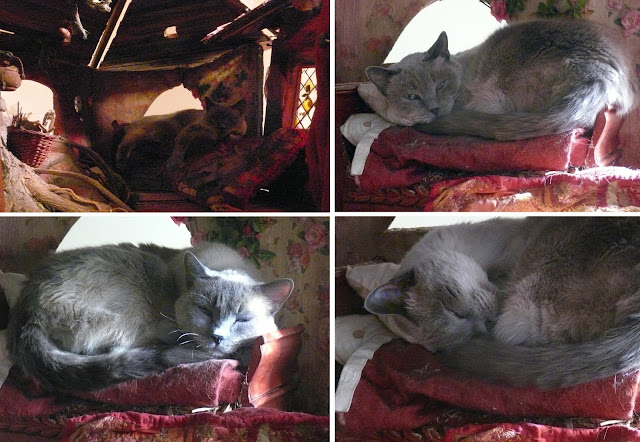 These photos are not only adorable to have of any kitty, but they are also as rare as spotting a unicorn! We hardly ever saw this cat of ours and one day, while looking absolutely everywhere in the house for her, I accidentally peeped into the Halfland cottage set to find her sleeping on Rana's little bed!

Even before Cloud passed, Our most elder cat, Isabella passed away too. She was 20, which by any standard is a full life for a cat. But in her case, reaching that number was even more remarkable as her life was fraught with ill health and constant stress. She was a feral rescue when we lived in a canyon. She, and her brother from an earlier litter, were highly visible as pale, lilac-point Tonakese in a coyote feeding environment, where a cat's inability to blend into the brush at night meant they might not live.

Paul skillfully captured her, but by then it was a week or two later than we had caught her brother, and that seems to have made a big difference in her staying completely feral all her life. We hardly ever saw her in the 20 years. She never let us get close enough to her to touch her, ever. We never intentionally frightened her nor stressed her but she behaved as though everyone was a constant danger around her, even feeding her and looking out for her, and being kind made no obvious change.

Until the day she died.

On that day she came and sat on my lap unbidden. She purred and asked to be petted. I didn't catch onto what was happening until it became clear she was in real trouble. A few hours later, she cried for me to help her so I comforted her as best I could and then she vomited up blood. The serious kind, where there can be no mistaking that things inside her body were broken.

That's when I got online through tears and started Googling around for what we could do. After a while, it became clear, given her age and extreme pain, that we should call in a vet to the house to put Izzy down, to relieve her of her agony as soon as possible.

They came on an urgent basis within a couple hours and it wasn't until the kind doctor administered the drugs that would let her sleep and then cause her to die, that I felt the shrill wraith of pain that had filled the house all day at once subside. The contrast was so profound, I wept.

I was so grateful she had been relieved of her anguish and so contented that we could afford to have her pass in the most grace-filled way we could provide. 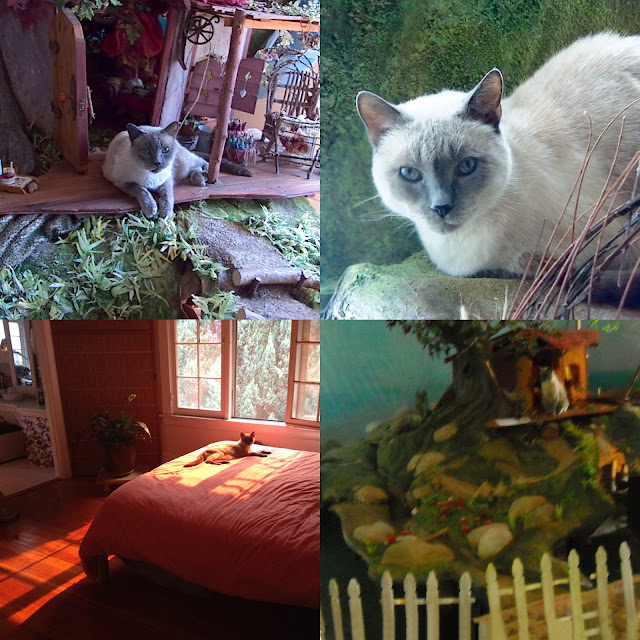 She liked hiding from everyone through the years on the Halfland sets.
The colored light through the window lower left was from wildfires burning that year.

Izzy on or near the day of her passing. Can you hear the pitched tone of pain even through the pictures?
Posted by Shelley Noble at 9:34 PM No comments:

Catching Up: A Lovely Grey Cloud Has Passed Over 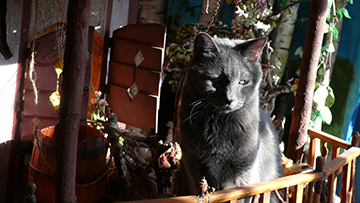 Our long-time life companion, Cloud, passed away a while back and thought you should know.

She had had a stroke at some point and would fall down each step but then somehow kind of healed herself from that and lived a year or so longer. She never adjusted to having the two newer cats in the house and seemed unhappy since they arrived. We didn't know the optimal way to introduce them, not that in Cloud's case it would have improved their reception.

I think her being the Queen of the house--and then suddenly not--
rubbed her the wrong way and I'm truly sorry about that. 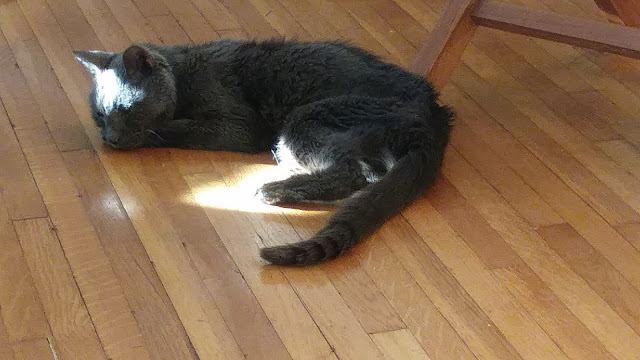 At rest in a square of sunlight, a few days before her passing. 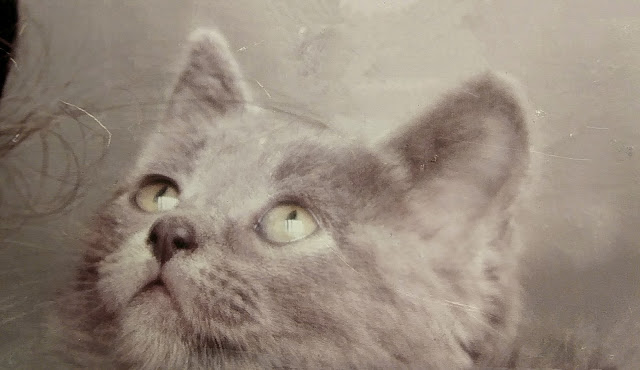 As a wee rescue kitty found in the flower pots at our local home improvement store.
Being starved nearly to death, she weighed 00.0 on the vet's scale when we took her right in and bit the nurse's finger when she opened a can of food for her, so hungry was our little grey cloud.
With early trauma like that, she was rightfully always food-obsessed. Here you see her just after stealing a huge beef roast off the counter, hot from the oven, bigger than she was, dragging it between her legs nearly tripping over it with each step. This is how she looked as I just took it away from her for our dinner. She is wondering how she can get it back.
I loved her. She had a very healing purr and would come to me when I sang her special song out loud.
For more fun photos and stories about Cloud, they're posted to Halfland Underground.
Posted by Shelley Noble at 8:16 PM No comments: 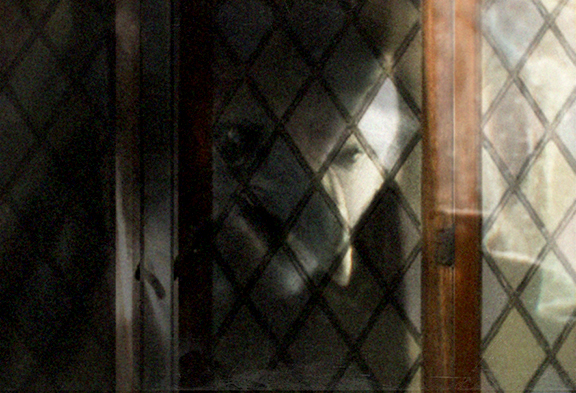 Sketch of half crow woman, Tarn. A mock-up of how she might look when we first see her outside
the cottage window at night. I was after your seeing a human face outside the window first and
then a giant crow staring back from the side of her face in the shadow, i.e.; the Halfland effect.
I have in mind a reworking of the lower jaw in the Tarn puppet. I am not entirely happy with the marriage of the lower beak to a human jawline. The puppet ended up looking more comedic then I was hoping so I was using the opportunity of making this digital sketch to work the concept out a bit better.
I need there to be no human chin and a large curved bill, like how my own profile feels when I let my jaw go slack, like this... 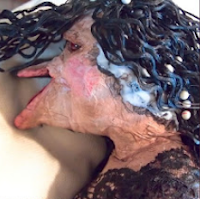 But the result shouldn't look like a pelican either, as the current puppet looks above.
This exercise (sketch at top) helped me to see why I made the choices I did. But it also gave me the idea of how to modify the jaw to get closer to what I am after with the sketch. 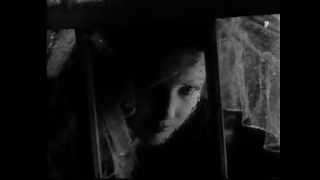 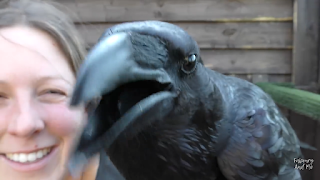 I wanted a sketch of Tarn that had the right mood so I could put together some sound ideas from mynoise.net after yesterday's fun with the opening background sounds.

Want to hear the first background soundscape for Tarn's Entrance sequence? <<<<Click the link to the Super Generator and let it load! (Picture the visuals of the scenes rendered in the style of the top image.)

Here's a still shot of the 28 elements composed and controlled as I wanted them. (If you hover your cursor over each slider in the actual SuperGen linked above, you will be able to see the names of each specific sound that was used to make the scape.) Enjoy! 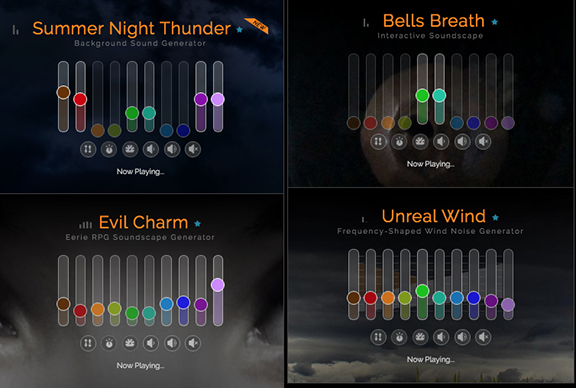 Note the notes: The ASMR style whisper you hear is more like the negativity that comes with this character and not the character herself speaking verbally. When I add a hit of glass shatter and baby crying effects I have into the mix, it'll be so right on!

Posted by Shelley Noble at 12:02 AM No comments: