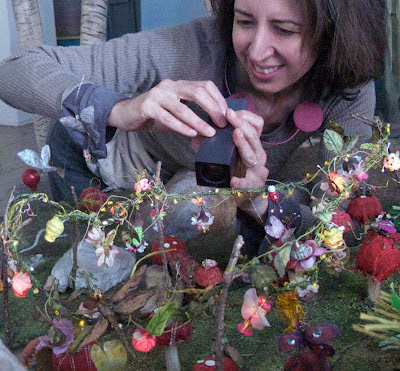 Here begins the story of Lytro and the Halfland Storybook.This is (NOT a Lytro shot of) me permagrinning through all my first Lytro experiments,like shooting a fully decked out super festive Halfland bug party.Yes, that square tube is the Revolution.

When I started creating this 20-year stop-motion animation project it was 1993. You may recall that there was no consumer level digital photography, no public use of internet, no affordable onion skinning software apps. No real ability for an individual to direct their own movie within their own means at that time. Hard to imagine that reality existed now as we've all been living in an embarrassingly rich haven of powerful tools of artistry and global connection since that year.

It seemed as though Halfland, my personal folktale animation, was being made in the precise moment in time when it could in fact be made. Not a moment sooner. It's as though the technology emerged and matured as I slavishly built each insect and blade of grass for its private, magical world.

Photoshop was the first atomic bomb of empowerment I recognized as a game changer for me personally. I bought-in at v2.0 and began making digital collages that awoke my capacity to make visuals. With Photoshop, I could express what I saw inwardly, exactly the way I saw it, in a way I knew I never could through traditional fine art methods.

Years later, when we all began to use digital cameras and upload them online, to blog, to connect through forums, to have experts mentor us in our areas of interest, it became crystal clear that Halfland could be made for next-to-no-money, distributed online worldwide for free, and allow those who might enjoy seeing such a film to watch it, engage with it, and to become part of it somehow. Halfland has become my art, my poem, my passion. It makes me laugh at certain things in it. I could weep over how much I want to see the puppets in it move. The technology and what I wanted to make was a match made in heaven.

This project, this type of project, at this specific point in creative empowerment. It is happening. This post announces the latest exciting development that has once again come forward at the right moment, the Lytro Light Field camera...


Deep inside the den of 1/2L.'s Writing Mouse under the living Answer Tree, his cupboard is stuffed with tiny bottles of ink and birch bark paper scrolls with gilded edges for his journals. (The acorn tea set was made for 1/2L by Sharon Ferg.) LYTRO LIVING PHOTO: CLICK ON THE CLOSEST EDGE OF THE GREEN JOURNAL THEN ON THE LITTLE WHITE BOTTLE ON THE CUPBOARD SHELF. THIS SHIFT IS SLIGHT, FOR A BIGGER EFFECT, CLICK ON THE ROOT SLASHING ACROSS THE RIGHT HAND CORNER AND THEN BACK TO ANOTHER ITEM.

For the last 8 years, while I've been actually building the film's sets, I was running into the real technical dilemma of how on earth I would practically photograph/capture the detail and the depth of what was being built. The Writing Mouse's room, for example, was a square foot box loaded with the most minute props and super rich texture that in order to photograph it with any depth of field effect (ie; vital atmosphere) much of its charm would be lost. The moment I would focus on the brass key the size of a fingernail, the cupboard behind the desk with all its birch bark gilded-edge scrolls and acorn teapot would be a blur. This was becoming true for every element on every set in the series. Then I heard a rumor about the Lytro camera coming out in early 2012.

It did come out, bless the makers, and I have one right next to me now. It's a miracle to me. A thrill. Lytro is something new in photography in the same vein as photography's invention itself. One of the more stunning effects it gives is that we can interact with its images and focus in them anywhere, in real time, while we are looking back at the image online or on a tablet, etc. (There is much to read/watch/see from CEO-Founder, Ren Ng, Director of Photography, Eric Cheng, and the first Lytro users about it of greater depth--ha online so I'll only focus--HA here on how I see its implementation working specifically for this project.)

In short, Lytro is a Light Field Camera, that's the innovation. Other previous cameras capture light hitting a subject from a single direction essentially whereas Light Field camera captures all light in every direction. It's not registering in pixels alone, but rather each capture records 11 million rays of light on its array of insect eye-like censors (1 pixel + 1 direction = 1 ray; 1 million rays = 1 megaray; each image contains = 11 megarays). These make up what Lytro calls the Living Pictures.

It's not so much about having high pixel resolution (as of yet) but rather about using the low res web for sharing them and about what this light field capture data can give us after the image has been snapped.


More 1/2L. bug party action where the seed pod beetle tries to help himself to a slice of cake, another fly sips tea through a striped straw the size of pencil lead, and in the lower left a little thief grabs the rest of the cake for himself. LYTRO LIVING PHOTO: CLICK ON THE VARIOUS BUGS YOU CAN SPOT TO BRING THEM INTO GREATER VIEW. BIGGEST SHIFT IS FROM LOWER LEFT CORNER THIEF TO ANY OTHER PLANE. THERE ARE ABOUT 6 BUGS IN THIS TEST IMAGE.

Part of what I'm exploring with Lytro is having an enhanced Halfland storybook for tablet devices that allows the reader of the book to engage with the 3D, hand-built, puppetry illustrations as the reader explores the story.

Again, an uncanny technological realization emerging at the moment the project can benefit from it.

Currently, I'm planning to shoot the storybook with the Lytro as the frame-by-frame animation images are being made with its standard FZ50 camera. So, for each set up, my no-holds-barred animated version of the story is taken as a separate narrative is also shot with the Lytro for an enhanced illustrated book for children.

I'm beginning to experiment with the current sets and puppets to get a feel for what the Lytro can and can't do. How to set the plane of focus for the greatest shift in my micro puppets and sets for the best effect possible. And learn how to compose pleasingly in a square format. It's an intoxicating process of discovery.


The beetle in 1/2L.'s Bug Band, this gruesome fellow strums a pretty little guitar the size of a baby's finger. LYTRO LIVING PHOTO: Focus on the guitar belly to see the twists in its sewing thread strings. The layers of roots shift perfectly in the upper left!

I'm just learning. Excuse me while I try to post these and other early test shots up at the Lytro site for you to try out. Does the focus shift when you click over various planes? Does the effect work on the blog as well? Let me know! IT DO! BY GEORGE.
Posted by Shelley Noble at 5:50 PM 18 comments: