From the Weirdness Dept: The Urhu Revelation 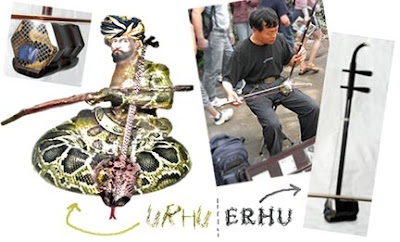 While Ron and I were working on art for a web site at my desk today, he noticed the Halfland character sketches clipped to a folding screen nearby. He made a double take on the one of the serpent sage musician in the film called Urhu and asked me if I knew there was an instrument exactly like that made with snake skin, exactly like that, that is played, exactly in that position (only bowed by hand, not tail). I got a pain in my stomach as he said that, like a mule kick.

Oh yeah, the NAME of that instrument?... an Erhu. Erhu/Urhu. Now what's particularly odd about the coincidence is how I arrived at creating my Urhu. The name was a play on an esoteric Sanskrit word meaning "God", Hu. The character's name UR-HU was my own private meaning of the enlightened character realizing that "You are Spirit" (U-R-HU). He is the half serpent/half wise one in the desert spending his eons playing this instrument contentedly as metaphor for the breath of spirit we ourselves vibrate to, as the strings do, like a god. The fact that there is an instrument like it in every aspect, down to the curve of the head, as Ron pointed out, that I *made up*, named so much like the character, made of snake skin itself? The mind boggles.

Ron even has an Erhu himself that he bought while in China and plans to play it for me next week. 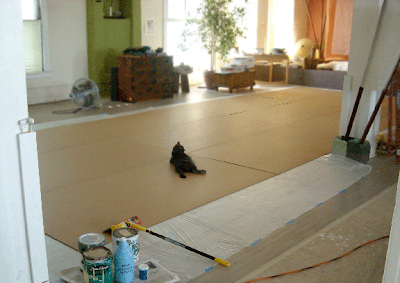 The material for the giant sky backdrop arrived this week and I've been putting it together the last couple days. I was intending to use it horizontally, as you see it partially laid out above (with a "Cloud" on it, HA!), but a subsequent paint basecoat curled the edges so that when Ron walked in today he assumed I had meant to use them vertically so they make a perfect SHADOWLESS curve around the set. That got my attention, updates coming...
Posted by Shelley Noble at 11:58 PM