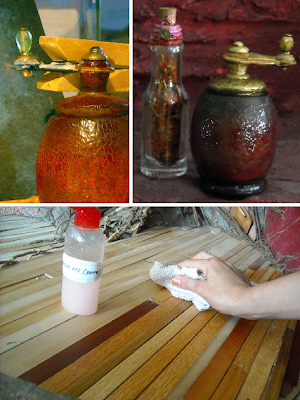 Made a surprise pepper mill for Rana's kitchen out of a wooden cat toy, wooden disks, and various metal bits and beads. Held the odd bits together with a clothespin while I brushed in glue to hold it together. The mill's body finish is a dusty porcelain crackle with a brass top. Rana also got a sealed gift bottle of saffron petals courtesy of an old miniature Tabasco bottle, adding to the others collected.

Taking a cue from readers Brian and Rane in the comments earlier, I stained the cottage floor with nothing but pure coconut oil. It worked like a dream and still looks rich after it's dried. Thank you, guys! 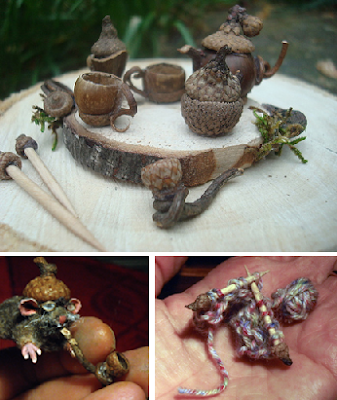 Friend of reader Peggy Fussell, Sharon Ferg, has made something beautiful for Halfland. She crafts wonderful woodland things out of acorns and raw wood. I couldn't resist buying one of her spectacular miniature tea sets. I knew it couldn't be made large scale enough for Rana, but if she made it small enough, it would be ideal for the Writing Mouse. The excellent photo of it above was taken by Sharon before she sent it but it looks even more magical in person. Sharon so generously also sent along a bonus of mini knitting needles (including tiny a knit underway) and a proper pipe.

The Mouse puppet above is the small version of the character. He'll be made larger for Film 2 and should be able to use it then. You are extraordinary, Sharon, thank you for sharing your talents in this film.

The explanation: I'll say this quickly: When I was a child, my mother would often show me a newspaper clipping she carried in her wallet of what I remember was a photographic version of Magritte's famous L'Explication of a blended carrot and glass bottle. I can see the clipping crystalline clear in my mind. It was well done, many years before computers, and had a perfect representation of a 3D carrot-bottle made in a darkroom. My mother was fascinated with the image and her enthusiasm for it affected me. She would repeat, "See, Shelley. it's a bottle [pointing to the bottle] and a carrot [pointing to the carrot], and then say, a carr-bottle! [pointing to the blend with a big smile]. It's one of the few moments I recall her ever talking to me.

I guess this won't be quick. A while back while I was making props for Halfland, I thought about Magritte's painting, and the photo version from the 60's from the wallet, and Half-Land now. I thought about pictorial metaphor, synthesis, hybrids, double image puns, unifying objects of different domains, surrealistic works, etc. Maybe my entire interest in half-animal/half-human creatures originated with the moments I spent closely studying that image in my mother's wallet. I thought for a private joke to myself I'd include a carr-bottle growing in the set's garden, as a progression of the figurative idiom.

I made a replica of the blended bottle out a dark glass bottle I had here. I bought the more wine shaped ones to make additional configurations; maybe split down the center, etc. But the scale of it didn't work for either the bottle or the carrot. So I made a carrot growing inside a bottle. It was fun making the carrot out of cut foam so it would stuff inside the bottle's narrow neck (I had experience from xmas gift 2007!) I don't know if it's successful, but it is a nod to the concept and truly an inside joke.
Posted by Shelley Noble at 2:36 AM