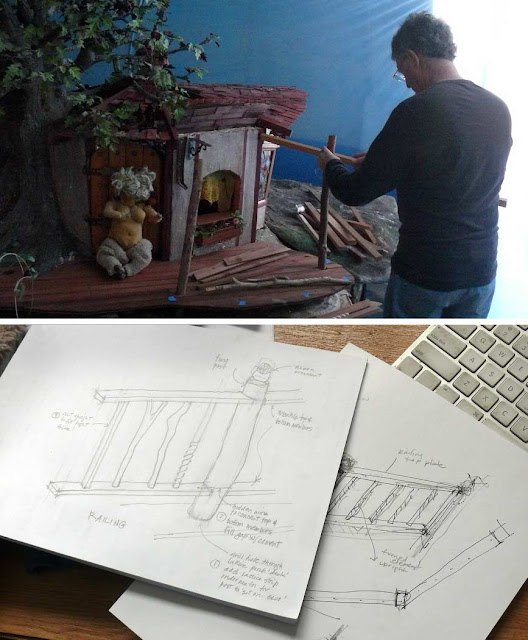 Supreme architect and friend, M.Charles was fantastic a few weeks back when he came to visit and help design & build the cottage porch here in Halfland. You helped me so much that day, Charles. I can't thank you enough. THANK YOU!


He dove in and did a lot of problem solving to work out the perfect porch for this set using nothing but materials on hand. His wonderful sketches are above. He wouldn't leave until he got the construction well underway. 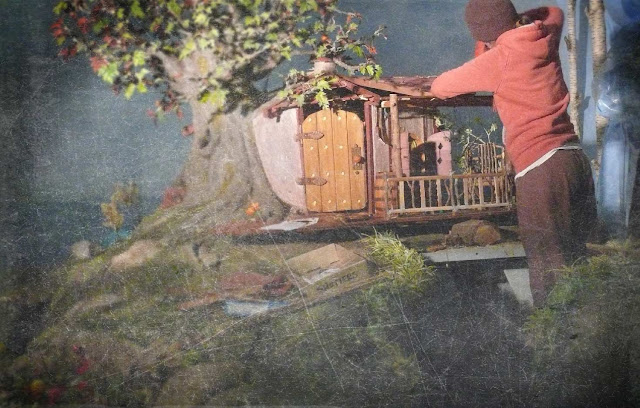 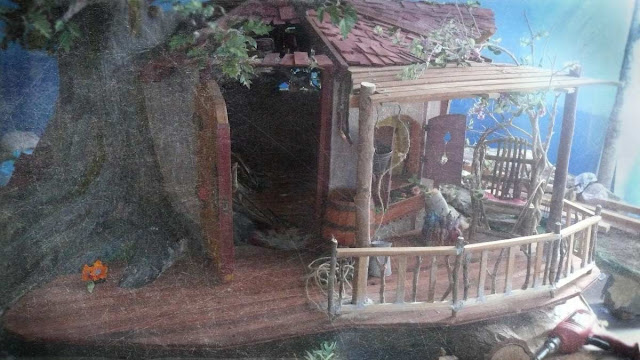 It's still in progress as you see it above, yet surprisingly rugged and sturdy, held to the cottage via just two screws.  What happens next is the wisteria chair gets finished and planted off the back of the decking and its vines woven in between the roof's trellis slats. But that's after the entire porch structure gets its color/tone evened out with diluted acrylic paints.

Cirelle will have to get the window box replanted with it's tiny fleurs. And the water bucket pulley system devised for over the rain barrel. Rana's loom will have to be built and set on this new room/porch and her bags of wool set around it. I'll have to use wood epoxy to secure the little acorn nut post caps to complete the scene.

The scenes planned for the porch set (on the cottage set) is Rana seen weaving a macro texture of a butterfly wing in wool on her rustic loom with a spider nearby threading gems onto its web in the doorway.

Construction deets: I have sorted all my dried and seasoned branches and twigs in the store room, so it was a simple matter to locate fairly uniform diameter twigs to cut down for the porch's railing balusters and posts. With Charles' advice in my ear, I constructed the railings by careful cutting and gluing. I used a scrap of some kind of wooden channel that I was able to shove the uprights into for stability. I used ample wood glue and let the four lengths dry flat with heavy tools as weights.

After they were solid, I filled in any gaps and blended the various shapes into the form with my trusty pre-mixed flexible cement. The railing lengths were joined by a time consuming process of drilling small holes into each newel post and length in order to embed pieces of wire between each join. Then the glue, then the cement, and finally the wood epoxy. The tall porch posts were custom fitted with cement collars so they can be removed from their drilled plug-in holes. After that was all dry I moved the porch set from the workshop to the main set for finishing and installation.

Meanwhile, I took apart a very old store bought twig chair, chopped it to pieces and reassembled it to be smaller for Halfland's main scale. I've had the chair for years and have always noticed little munchy bits heaped around the chair wherever it was. I knew something was inside having itself a feast. Sure enough, as I was disassembling it, I discovered the entire chair was filled with cleared out tunnels and holes. Somehow I don't mind. It seems right that Halfland should have living things in it.

I have been creating a wisteria vine for the porch from old dead tree trunks that I've saved and handmade fabric blossoms and crepe paper leaves. I've been wiring those elements onto the chair, trying to make them seem half of the other. I want her porch chair to look nearly grown there.
Posted by Shelley Noble at 10:10 PM