A Rare Bird: Tarn Is Coming 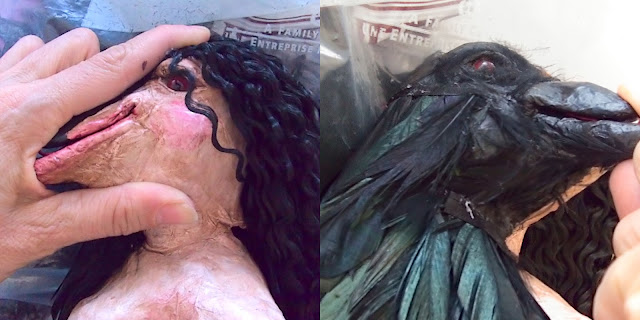 I deviated from my sketch for Tarn's human half face. Instead of having the bill be a nose with the mouth underneath, my hands went with keeping the beak a mouth and building out the jowls underneath. She also currently looks more happy on her human side than I had intended. We'll see how that gets handled shortly. 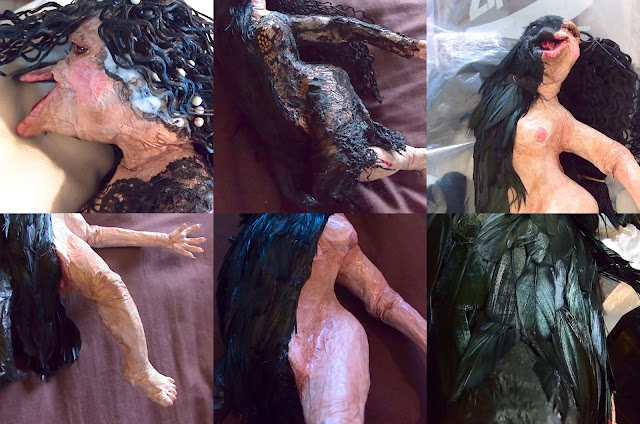 This is the puppet that was made over an unfinished clay sculpt with my bizarre finishing techniques. It's Bee-Zarre to see a new mythological creature coming to life for the first time. We've all seen mermaid and saytr hybrids with their halfway horizontal demarcations. And I've seen a lot of wonderful human to crow mash-ups, but never a creature divided in half vertically (upper right). Is that possible? Could the Halfland Tarn story be an entirely original new myth? I hope so. 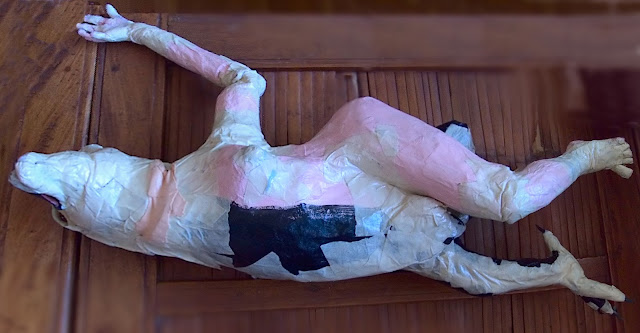 This is a shot of the completed Tarn puppet in her prone unconscious state before further finishing took place. She only needs to be shown in this position and sitting upright astride her tortoise-hare horse holding the reins. Both extreme poses can be achieved via some pretty insane internal armature and skin rigging throughout the whole puppet. 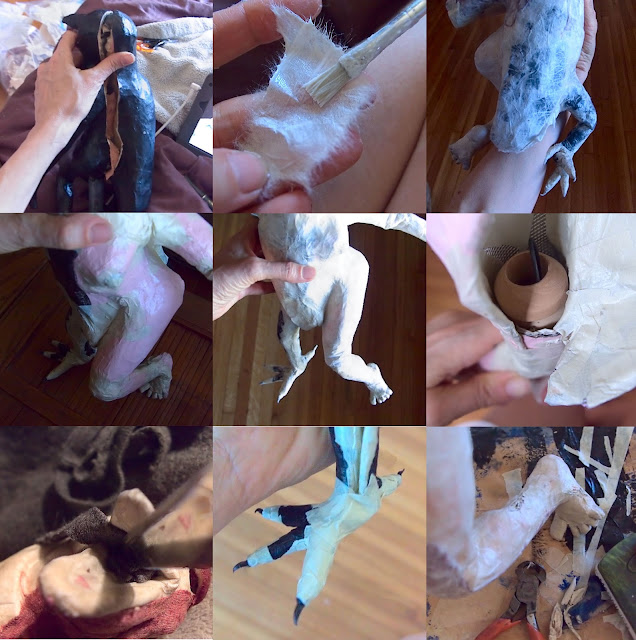 Upper left shows the 8 layers of paper being cut open to release the original sculpt. Layers of torn paper and various types of flexible adhesives are used to mache puppet bodies into a single piece.  I go back and forth with tape and filler material to further finish the sculpt after the initial core is made.

Another layer of washi unifies the additions so I can see the new tighter sculpt. The interior of the puppets are made with multiple wire armatures, almaloy and steel (thanks for the demo of that style, Yuji), which is then further built out with odds and ends of woods shapes were firmness is in order or tightly crammed wool sweater strips (being shoved down her throat with scissors lower left) for volume.

Claws from a holloween crow were added to the puppet skin crow foot with masking tape later made into one joined piece with layers of washi and thick medium.

Next post: How to Get Crow's Feet
Posted by Shelley Noble at 5:38 PM