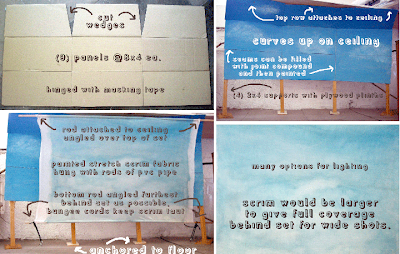 After many notions of how to construct a sky background, I believe I'm much closer to what I'll be doing. I took a little bit of advice from everyone, then modified the concepts to be even cheaper and easier for me. Where I'm at today is 9 large panels of single-wall cardboard, er, double-faced corrugated sheets! (about $3.60/ea.) attached together, seamed and painted. The top row is cut to form an almost-cove curved up and over the set. A large stretch fabric scrim is hung in front of the cardboard partition on a steep angle, over set at top and far back from set at bottom. (scale model and schematic above, click to read) The whole 12'x 24'backdrop is lightweight and moveable so as to stay opposite the camera in wide shots. I've sourced the 4'x 8' panels, and will get a price from our handyman for helping me build it. I may order about 15-20 panels, in case this idea is so easy to construct I'll be able to essentially cover the entire scope of the set with it.

I watched Suzie Templeton's Peter and the Wolf dvd's Making-of featurette again with an eye towards how they handled the sky for their enormous set. It was extremely valuable to see, partly because after taking 5 long years, and an talented army of over 250 people working on it, their sky solution was to place a blue screen card behind the moving puppet and digitally place the sky in the majority of the film! The rigs were treated the same way, giant brass, heavyweight, jointed, contraptions setting on the set in every shot! That film wasn't animated--it was painted! I adore the film for it's detail and thoughtful workmanship but it was both encouraging and dis-heartening that after all their preparation and effort there wasn't an affordable way to backdrop such a massive (gorgeous) set as theirs.

That set is so huge it makes Halfland look tiny. They could get away with simply painting the giant stage they were in with sky blue and fixing everything in post because the ceiling height there must have been 30' if it was an inch. And the space was so extensive beyond the massive set that there was actual sky in their background! 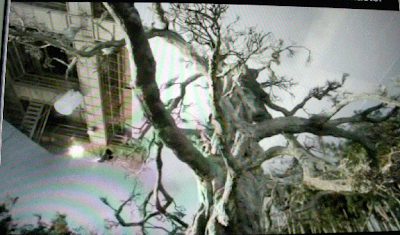 Giant hole in sky on the set that had to be digitally painted out, around all the tree details! madness! (Image copyright© 2006 BreakThru Peter Ltd.) 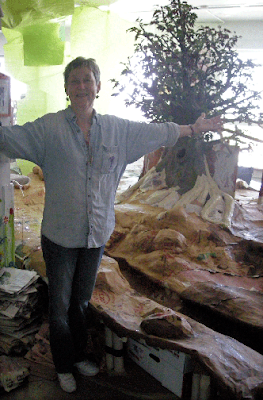 My dear friend, Esther Jantzen, came by last week to trade working on Halfland with a brainstorming conversation about several of her literacy projects. She's an amazing child advocate working to get parents to speak and read more to kids. With her help Speed Maché layer 4 was DONE! twice as speedily and so much easier! Thank you, Esther! You showed me collaboration truly can make a project easier. 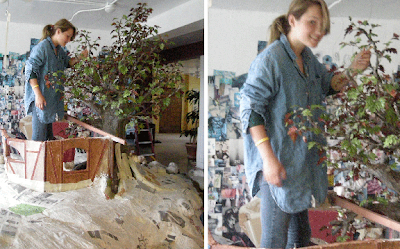 Intern Sophie came by last Monday too (I guess denim is a must have in 1/2L!) This time I gave her a....brush! Thus making her job of sculpting over the blobs of hot glue with flexible cement so much easier! Duh! I had forgotten that little point the first time.

During our work conversation about her first stop motion project, we hit upon the idea. Sophie will make her first film about a little kitten, Socks, in a basket and all the adorable business it gets up to in there. (We were inspired by the real life wittle kitten that her sister brought over for us to audition living here that day. The sweet kitten went home but the sweet idea stayed.) Now Sophie is planning out the moments, the notes, she knows she'd like to hit in the film on blank business cards and next week we'll shape them into a story board.
Posted by Shelley Noble at 10:50 PM