Been giving huge brain pan real estate over to how the heck I'm going to backdrop this monster of a set, how to composite in the sky, how to block the window light, etc. The solution has to be satisfying to me and be in keeping with a papier maché budget. The entire ethos of the project is that it be handcrafted and affordable for anyone to make. Seen here is my current cunning plan.

I saw many wonderful options online, unfortunately all very costly and therefore not workable. Some available products, like the foam-backed blue screen linked on Mike's sites, are wonderful but would be astronomical to buy for a set the size of Halfland. Not to mention the professional stands to support it.

I got clear during an acupuncture treatment, you know, laying there, with several needles jammed in... that I was certain I wanted to make the backdrop out of materials on hand, like cardboard. I've decided against digital compositing via blue screening, opting instead to do as much as possible in camera, as they say. I thought I could construct scenery flats out of large scale cardboard, etc.

But then dropped that idea and got what I thought was an even simpler and more elegant solution.

What's all the (B)racket?
I'd still use the cardboard but this time just as scored, curved coving around large brackets (see mini mock up above). The brackets could be attached directly to the workshop ceiling, right through the coving spine, and then a backdrop substrate could be attached to the coving and drape down all the way to the ground if large enough. The idea is to soften the junction of the ceilings and walls to make the transition invisible in order to affect a sense of endlessness, just like how long this project is taking. Perfect. It was simple, elegant, inexpensive, and easy to install and move. 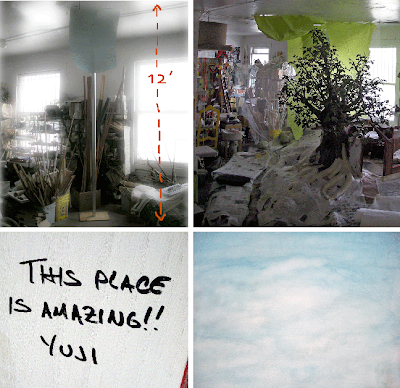 But at the Home Despot yesterday buying the gear, I spotted 12' sheet metal roof edge @$2.49 ea. I bought three to test a new idea they gave me. I would curve end of the pliable struts and drill through it right into the ceiling, attach a large backdrop material to multiple struts, and anchor the bottom ends with plywood bases attached through the metal into a length of 2x2. (see first model upper left)

Then came the matter of how to disguise the two ceiling fans over Halfland. Take them down and paint the entire ceiling sky blue? How about covering them with backdrop? I took the largest material on hand and taped it up to see. The actual backdrop material would be large enough to drape the entire ceiling and as Yuji (aka; Dick K.) smartly pointed out when visited Halfland last week, if I were to chromakey out the background I'd have to use blue rather than greenscreen, otherwise the tree's leaves would flicker out. Yuji is actually the one that got me to start thinking about tackling the question of the backdrop. He commented that Halfland was much larger in person, if you can imagine that. (Mysterious Yuji signed the guest artist board while he was here, lower left).

My current thought is to drape the entire space with ____blank? huh wha?_____ (a 30' x 12' wide StudioCloth™ @$30/running yard? $300(?) too much; a few 5ft x 10ft GREEN-SCREEN CHROMA KEY BACKDROP panels found on Craigslist @$35/ea.?) paint it to my liking as a cyclorama, and then stretch a massive scrim material in front of that to soften the imperfections. I could additionally project skyscapes onto the scrim and/or get fantastic illuminated sun effects by well-placed lighting in between the two layers. Or by spot front lighting a metallic sun.

I mocked up the sketch at the top of the post, nearly to scale, of what the Halfland set would look like in such a sky set up (It's an upsidedown version of the bagillion dollar dream backdrop set up seen on the left. I'm thinking of making the stand of trees on the left side in the fashion of Ulla's paper theaters, except on an enormous scale. There is a structural support column there and large cardboard painted trees in layers could be just the trick...
Posted by Shelley Noble at 12:13 AM