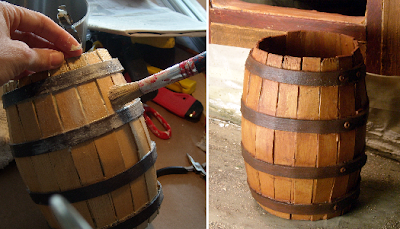 (A cooper is one who makes or repairs barrels) hee.

Two days to make one prop? a.) It's an important prop that features a lot in the film over several scenes. b.) I'm now enjoying the satisfaction of starting and finishing things for the film in a single push and finally getting things done. 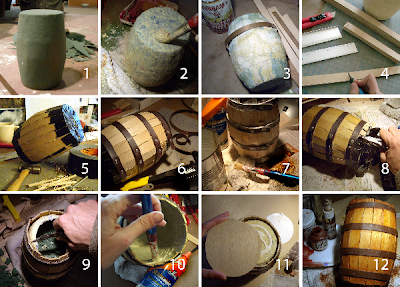 I've been worried about how I was going to make this rainwater barrel for Rana's porch for over a decade. So, now instead of having to worry about it, it's done. I had the idea to use a carved base block of Floral foam [1] reinforced with 2 layers of Durham's water putty and tissue paper (in my favorite plaster maché technique) so the shape would be durable enough to be used as a mold for the barrel's shaping.[2] It worked and became sturdy and rock hard when dry. I sketched where the rings and staves might go. I thought I would use real copper for the rings that I bought for that purpose in New York But watching several barrel making videos on YouTube (! praise G-d for internet references!) I realized the four rings would be minimal and there wasn't enough of it. [3] When the balsa wood planks I bought to use were far too brittle to curve over the barrel shape, I got resourceful and decided to use a piece of scrap 1/16" hardwood snagged from the trash somewhere and cut it up into the right size using a straight edge and utility knife. [4] I deliberately used the board's frayed rough edge on the top edge for added texture and detail. The videos taught me that each stave had to be narrowed at each end in order to conform to the bulging shape of a barrel at its middle.

In order to get the shaped wooden staves to shape themselves around the blank block I used the combination of Gorilla duct tape and long nails hammered into the block's ends. [5] Then, in order to keep the planks shaped that way I had to find banding material that was strong enough to corral boards that would want to resist and sproing out if they weren't there to keep things that shape. I came across a stash of magnet tape in house that could be riveted into hoops and looked exactly like iron with a rust patina when finished later on. [6] While the ends were still firmly capped with tape, I slathered on a thick layer of stainable wood glue to fill in all gaps and to secure the rings to the wood so they wood be permanently fixed together as one unit. [7] In the morning, after the glue had dried I carefully wrenched the tape and nails off of both ends with pliers. [8]

Like cracking a poached egg, I cut through the hard shell of maché at the top and tore off the top third of it, leaving the interior of the wood to show above the "water line" that will appear to be in the barrel later on. [9] I scooped out the rest of the green foam all the way down to the bottom of the barrel (don't anyone dare say it o-0) leaving the hard maché shell in place. Gave the inside a thick coating of more wood glue. [10] Made a paper pattern of the barrel bottom, used it as a template to cut out more wood, glued it securely in place. [11] Stained the whole thing when dry with watered down acrylic and walnut ink. [12]

When I placed the finished barrel on the set where the cottage porch will be, it really brought the place to life. Very exciting! It will be used to keep the mermaid in during her visit at the cottage and also on the trek through the desert to see the wise man, strapped onto Rana's back with a fabric sling.
Posted by Shelley Noble at 8:17 PM