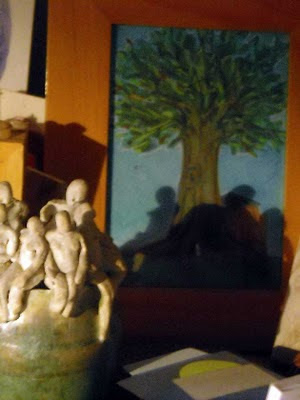 A few weeks back, while on the phone with Paul, I suddenly noticed that the figures on a ceramic vase on my desk cast a perfect shadow onto the Halfland painting that Sven made for my birthday last year. It looked as though one of the figures was sitting under the Answer Tree! I tried to keep it together during the conversation because it would have been a long story to explain and it was late at night. But I realized what needed to happen somehow at the end of the Halfland series, when my beautiful live actress (the one who is not a puppet) Rose Red plays with crude white paper versions of the Halfland characters, giving the impression the world here only ever existed in her mind.

This accidental concept should really give the film a more interesting finish. 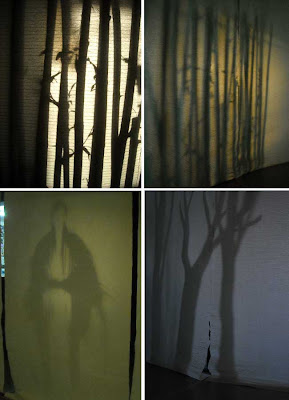 To blur the lines further, I noticed the the large paper trees that Peggy drew for me (seen lower right) make great shadows on the new paper partition that now runs the length of our place. Above you can see the bamboo set in soft yellow morning light and with crisp strong halogen worklight. Unrelated but another cool thing about the partition, the Sumi-e warrior figure from a martial arts book on the lower left was made via an overhead projector. We can change the imagery in various ways.
Posted by Shelley Noble at 2:43 AM