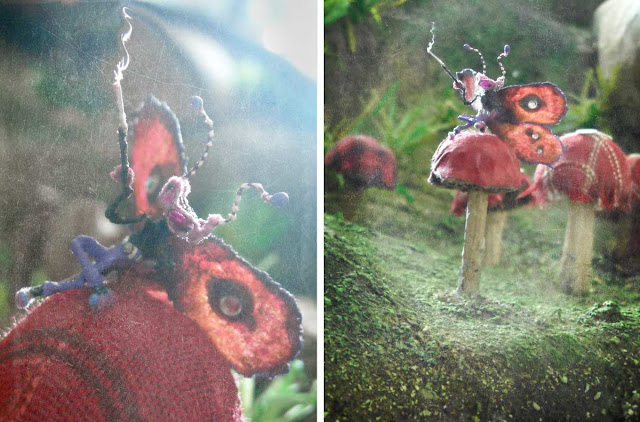 One of the background guests at the night time Bug Party in Halfland wanted to get down and then get on up again. This smooth jazz cat asked for blings on the wings and hot pink fuzzy shades. I personally wouldn't smoke anything (well, actually I probably would if it had no ill effect on health) but this guy has some kind of cigarette in a twig holder. He'll chill during the bash and groove to the music, food and wild bug company that will be celebrating all around him.

Here you can see the wool fiber smoke tendrils unedited on the end of his white wire cigarette, a close up of his painted silver head of a pin belt buckle and translucent specs lenses. It took me quite a while to figure out that two joined cells cut from aluminum mesh filled with clear glue lenses (colored with permanent marker ink once dry) would make such tiny scale shades. I kept changing the colors of his costume as he developed so the antennae got a few coats and too much texture (it's ok). The trickiest part was attaching pieces of wire to the sides of the glasses and then get them to act like over-the-ear arms over his antennae (works). Then the frames were black, then painted silver, then flock over with pink because I didn't dig the uneven texture of the silver. Couldn't get any smoother at this micro scale. 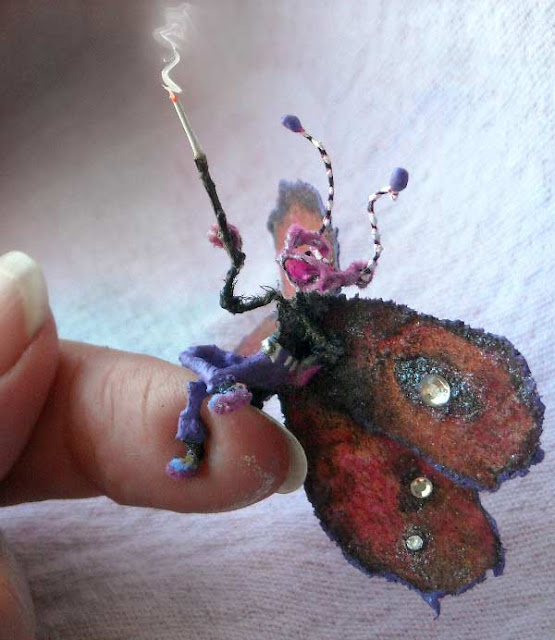 His groovy attitude came about after I positioned his legs and arms in this position. Once that happened, his character screamed to recline and kick back. You can just tell his moves on the dance floor are fierce. This Party is going to be fun.
Posted by Shelley Noble at 10:57 PM