'Xcuse Me While I Kiss This 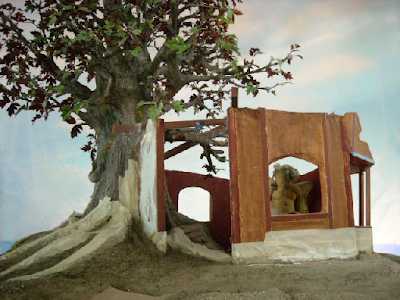 It was worth it. I had to marathon without booting up to get it done. I had to get to a violent level of ambition to make it work. But done I must now declare the Noble Design Infinity Sky backdrop to be.

Hey, Here's an idea... Why don't I build a HUGE tree for my stop motion set?! Wow, that took every bit of grit I had to do. Well, better build a suitable landscape around it so it has a setting, ooooo, wow, wasn't expecting that to take more work than the tree, well, this is the only big set of the film, so. Hey, better go ahead and put the sky backdrop behind the set so I can see where to put the distant hills to finish the set... um, whoah, THAT WAS WAY MORE WORK than all the rest put together! --What next--I'm afeered to axe.

I heard the new Charlie Kaufman film involves an artist (hilariously) building a life-sized replica of New York in a sound stage, hiring 1,000's of extras to act as population, as he rehearses his actors in a play for decades. How, one might ask philosophically, is that art different from someone living a "real" life. I see a slight connection to that concept in my building a total world called, Halfland. How about in your art? 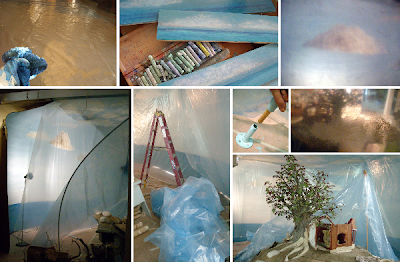 Small portion of the 25' x 20' dropcloth being rubbed with a thin tint layer of acrylic phthalo blue; I got my cloud mojo working by making 4 small strip paintings on scrap wood before beginning the set's sky. Making them, I discovered a new technique of building up the layers of color with exquisite pigment pastel powder burnished with sticky wax, layer upon layer in each painting; A lone painted cloud on the middle layer of the sky's "cloud curtain"; The Infinity Sky set up seen from the side view (lower left), painted cardboard far background, cloud curtain on clear plastic drop cloth, blue tinted drop cloth pulled taut and supported by pvc conduit and small bungee cords; The dry tinted sky awaits being installed in front of the cloud curtain layer (center bottom); The conduct supports were installed into the floor via plumbing flanges and fitted rod reinforced bamboo segments; Looking through the clear curtain back towards the set as a cloud begins to form (middle right) painted in situ; The gloved 10' pole acted as an extra hand as I struggled to begin hanging the sky layer by myself, not easy to do. 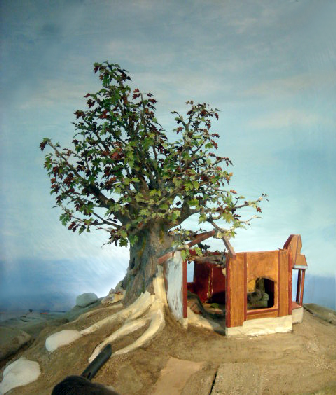 It looks exactly as I'd hoped. I had to keep working the sky layer until it was smooth as a drum, which it is for 2/3's of it. The remaining third needs additional bungee magic to be further tightened up. Plus, there's a pvc support running across the 2/3's point. I am resigned at this point to facing a post production rub out of the support and any sags that show on the few wide shots in the film. Of course, how the set will be lit will make a vast difference. In the main, this sky set up is giving me what I wanted in spades already. 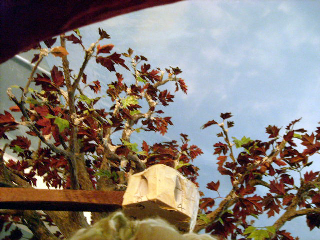 Some things turned out better than I thought. This is the sky shot straight up from inside the cottage. I had no idea the Infinity Sky would allow me to get these angles. This means I can show the Mothman character up in the tree's branches, as well as the bickering little Birds in Hats.

Up next: Get ready! The beautiful Foliage goes on!
Posted by Shelley Noble at 11:40 PM