In a recent post about Yanu's bamboo grove set I showed the finished Moon Lantern prop in the green forest. Here's a recounting of how Constance made it with me.

Job one was to determine the size to make the moon. I wanted it large enough to seem like the moon in the night sky yet also like a paper lantern hanging in the Answer Tree. It needed to be small enough for the mothman puppet Yanu to carry through the grove at night, to get that great light-moving-through -the-stalks shot, yet not so small we wouldn't know somehow it's also more than just a normal lantern.

It had to read as BOTH moon and Japanese sort of luminaria. But not so obviously the moon as to have photographic moon topography reproduction on its surface. (I plan to briefly superimpose the moon surface onto the lantern in post, like a glimpse, just to play with the misperception further.)

We started by taking (--ok, stealing.) We stole a small black rubber exercise ball from Paul's workout gear, covered it in plastic with masking tape, so it wouldn't get dirty. She wound a kind of brown bark-like paper wrapped wire in a spiral shape around the covered ball, then secured these ribs with thinner cloth covered floral wire as vertical supports.

This is where it gets tricky mentally. We decided then to cut off this wire cage off the ball in order to papier maché the plastic protected ball underneath with rice paper, a few layers think. Once dry, this paper shell was also cut open in order to get the original ball out. Then Constance carefully replaced the wire cage around the now empty paper lantern shell, seamed it up with more paper.

Cram the shell full of battery op'd lights and voilà! 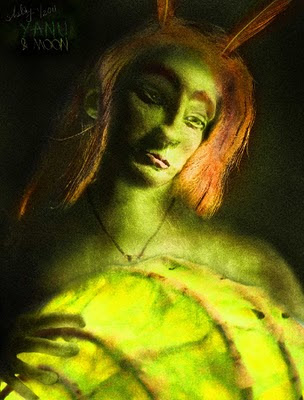 In Halfland, the moon is like a lantern hanging from a friendly neighbor's porch. Both a figurative and  literal metaphor. Here is a sketch of how Yanu will look at night, illuminated by just the Moon Lantern, as he slowly brings it home to rest for the night in Rana's tree (image concocted after being inspired by the amazing creative image maker Joel and his moon image.)
Posted by Shelley Noble at 11:26 PM