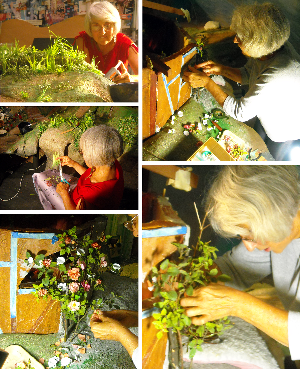 Carol in initial grass proving grounds, two upper left shots, then in charge of the roses on the right and bottom left. It takes an extra artful eye to create something beautiful while under interrogation-style lighting at night here.
I've known Carol for over twenty-five years. I knew her as the always well-dressed woman with the artful eye making interiors, cakes, and gardens, look professionally designed. But one day not so long ago, Carol asked to come along to Halfland with Sherie on Friday evenings after their workday was done. I coldly told her to have a look at the blog and see whether this madness was remotely anything she'd like to work on. And to my amazement it was!    o.0
I put her in grass-making purgatory at first, not really yet understanding the depth of her talents. But right away she rocked the grass so heavily I was taken aback! She took it to a whole other level of realism and beauty that will become key throughout the set landscape. 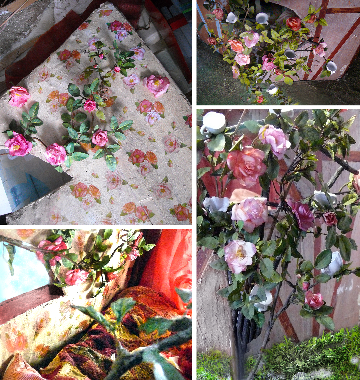 The roses growing outside the cottage on the right, and being placed on the interior wall upper left and from Rana's bed lower left.
I soon realized that Carol was going to be a huge boon to the set building and thought to give her a fun, plum job that I'd been relishing the idea of doing myself, the Tea Cup Roses. The tiny cups had been thrown and made to look as though they were growing on a bush, the coffee filter roses had been made and were painted in soft pinks and corals, even the twig trellis and silk rose vines had already been painted and prepped. All that was left was the task of taking those elements and making them look as though they were growing outside the cottage bedroom window and then right through the window and onto the interior bedroom wall.
I'm trilled with her results. And Carol has gone on since to design and create the drapery around the bed using fabrics with various seed pods! I'm going to ask her to complete the Tudor windows next and then... Who knows, but whatever it is she'll do it so beautifully I'll be amazed!
So happy Carol is here!
Posted by Shelley Noble at 10:33 PM