For scale see the geraniums on the stump through the gate next to the smallest of the dandelions. And also see the uber small twig bench under the cherry tree, after I filled-in/covered the cement joins underneath it and the tree roots with finely sifted mulch as dirt. (clicking on all photos enlarges them enough to see details much better! Clicking is good!)

Spent some time pushing to complete the Writing Mouse's House exterior set-on-set. It's in the micro-scale (there are three scales on the main set; Halfland scale [1:3], Macro scale [1:1], and Micro scale [guessing.... 1:12?] It's tiny! 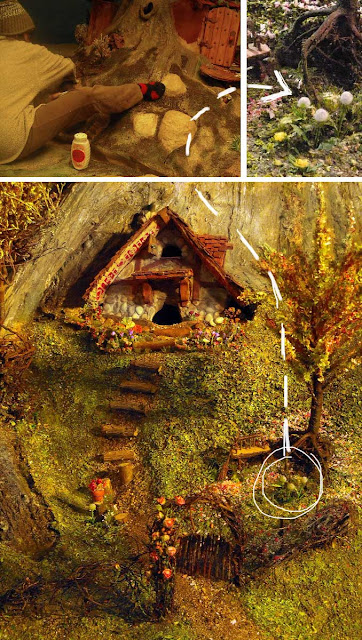 When I painted the landscape a bit a while ago I used a big brush and several colors of green paint that will work ok for the distant parts of the set. But it wouldn't work for the micro set areas that will need to be seen in macro close-ups. I took some time and covered all those painted areas back up with matte medium and mulch to break up the painted look. Above on the right, you can see a cluster of Halfland's smallest dandelions. There are dandelions in each of the three Halfland set scales now. (DandeSaga in planned for next post.)

I find, and maybe you do as well, that it takes more energy to push through the last 3% of a project than the first entire 97%. Been trying to figure why that is. All I could get is that at 97% the finishing touches seem so obvious that they can seem inconsequential but in fact when actually making them they are surprisingly still as challenging as the earlier parts. Whatever the reason, it seems to be an issue of mushy perception. Some people know how long and how much energy and effort will be required to fully complete things, either from experience doing it or from a facility for gauging it. For me it's a constant surprise.

But push on through I did. And now I get to mark off another project completion off the shrinking list. 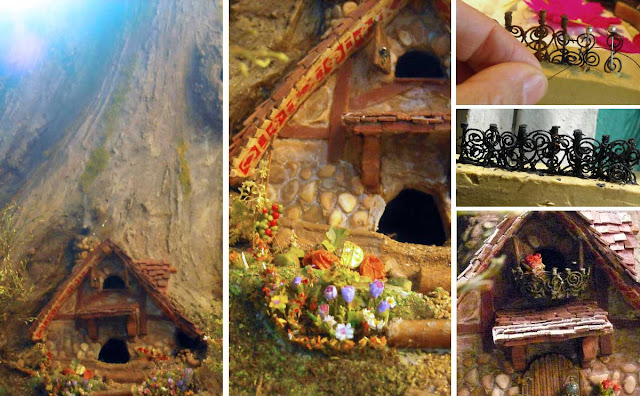 I added micro flowers to the Mouse's flower garden. I finally finished his ironwork upstairs balcony. I make fine work in jewelry but found making this little railing so difficult I resorted to tying the swirls on with black thread and then painted the entire piece with iron paint and rusting it over.

To get the ground cover texture for detail shots I pulverized the same crepe paper used as grass throughout the larger landscape. I lay down a coat of matte medium and sprinkled the hand cut fine paper pieces as if sowing seed, let dry, adding yellow highlights for a meadow effect. The larger batch of greens cut down by hand from grass-making scraps took :30 minutes to make and will cover the entire other micro-set area, the mushroom cafe.

You can see some of the vegetables, tomato vines on tiny twig trellis on left, squash (with grains of sand painted as seeds) next to them, carrots and cabbage on right, etc. a "bit" better in the shot above taken with the film's FZ50 (perhaps click to see even closer). But I will need to figure out how to get even closer macro detail and keep a sharp focus for these micro-set scenes. Will experiment with extremely shallow depth of field as shooting them begins.

The reason this set warrants this much attention to detail is because when we first arrive in Halfland, this set is the first thing we see (after the glimpse of a long shot). The audience will be forced to assume that the entire world of Halfland is this micro scale. How thrilling it will be to blow peoples minds as the camera swings back for the reveal of the much larger cottage and all its detail.
Posted by Shelley Noble at 11:39 PM