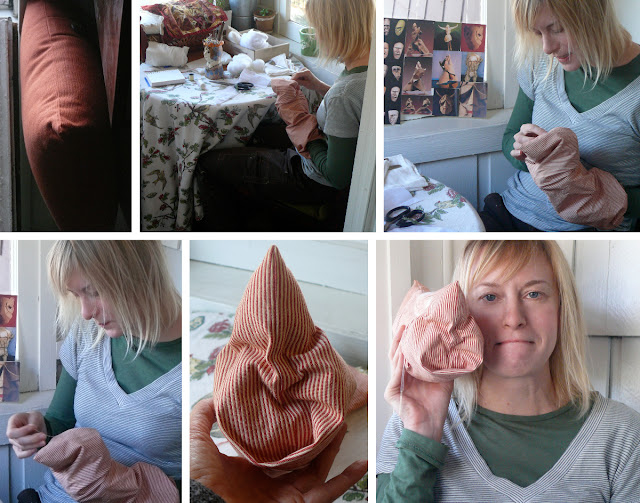 I'll have to tell you who this amazing person is, and how she happens to be sitting in my sun porch sewing a PERFECT face for the Caterpillow puppet, another time. For now you need to know her name is Christine, an accomplished artist, extremely intelligent, and has a pure, delightful way of being.

First thing this morning when Christine came to work on the production (!), I showed her a photo I'd taken of a pillow lying on a table near a window, noticed as I was waking up recently. I tilted the photo sideways (upper left) to express to her how I'd had the notion to make the Caterpillow puppet's face hit that marvelous HALFness ambiguity by using the natural shape pillows make rather than simply imposing features onto fabric.

She, being she, noticed a board of folded paper faces I had in the shop and realized afresh that they held good solutions to employ for this, a connection I never would have made. Just Right.

I sat and talked her ears off as she brilliantly used needle and thread to render a character into the miniature pillow previously prepared for this pupp. Christine's sensitivity to what I was hoping for was astounding. She created a character that I'm sure exceeded what I would have thought of/been able to make. I absolutely LOVE her result with it!

She took wire arms that I'd been twisting while she sewed and fed them carefully through the inside directly to line the features of the soft sculpture so that the character can be animated to give a little yawn (!!) as Rana the main character settles into bed.

(Coming soon; The Case for the Face.... hint, tea stains and scallops)