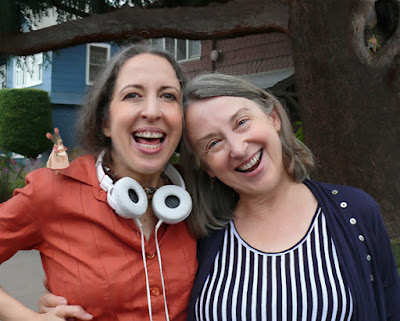 Lucky me! I got to have one of my most favorite artists, the one I feel most kindred with, come to visit last week! The extraordinary Ms. Maggie Rudy, creator of Mouseland (no, we did NOT copy each other--the names of our places being so similar was pure coincidence.)

I didn't have to fret about Maggie's visit, you know, whether my housekeeping was presentable, etc., because having her over was as natural as having myself over. That's how much I understand her, and believe she, me.


“My house is only clean when I'm neglecting my art!”

We had a long enough visit for me to show her my most important favorites and for a few things she thought I should know about to be written down, during speed talking conversation. She brought me a "January box"! (It was a super duper doozy one, details below). I gave her her January box early, as she was here but I'm continuing to add to one for mailing up to her early next year on schedule. These are little boxes in which we collect material that we feel may be of use in our respective lands and send through the mail. I started doing it just to show my appreciation for her work, a fan tribute. She outdid mine with what she brought down with her though and never has to give me another thing again.

Another tradition, established this visit, was to cook each other lunch with as much vivid natural color as possible. Fun, right? It was accidental as I was talking so much I didn't know what I was putting in the oven. Only about half of what I had planned to serve her got made. But what came out was so bright and pretty we enjoyed it all the more. Now the problem is getting me to leave my house to get to Portland to for her chance to do it. Ha.

She gave me a precious Mouseland button. I think one of the things I love the most about Maggie's work, besides the wonderful details and loving craftsmanship, is the living emotion her characters possess. She has the uncanny ability to instill her mice figures with an Illusion of Life even if they aren't moving (she makes charming animations with them when she wants). They not only seem alive but also alive with genuine feeling and thoughts.

One of the things we spoke about was realism in making things like insects. How some people are  able to remarkably replicate nature itself (I pointed her to Graham Owen's work as an example). She, in her authentically funny way, said that she used to be interested in that sort of perfect imitation bug making but then found that...

"I just wanted to put a dress on it!"

Girl, I hear you! 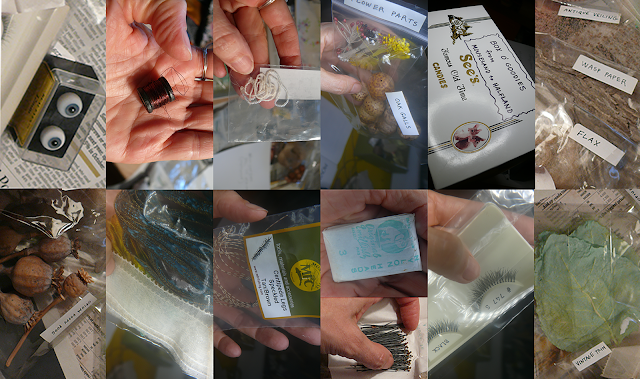 Here's what she brought in my Goodie Box that you may find as interesting as I did:


• high quality 12mm glass eyes by Pat Secrist
• dark copper wire, finer even than a hair (sourced from motors)
• smallest seed beads (on earth) from... are you ready for this?!... her Great-Grandmother's dress. (I felt faint from her giving them to me. So precious. A gift to treasure.)
• real oak galls (!) maybe from the very forests surrounding her house?!
• vintage flower pistils in several colors
• the box even features a cameo of Mouseland mice!
• beautiful array of beige natural materials; opium poppy pods, antique veiling, flax, and wasp paper (the delicate color variants come from what the wasps have eaten and spit out during nest construction, it was explained.)
• vintage trims
• striped fine twine that is used for fly tying to make centipede speckled legs. (She mentioned what a fantastic resource fly tying suppliers can be! like Montana Fly Co.)
• packet of vintage specimen pins (original Emil Arlt Elephant #2 to be precise--finest pins ever made) the kind one would have used to display mounted insects. But I love the simple paper wrap they came in just as much! It reads "Made in Austria" on one side and looks terrifically 1930's era as well.
• package of frilly faux eyelashes that she recommends for use as insect antennae (great notion!)
• preserved sea foam green lotus leaves (her favorite color)

Thank you, for these wonderful things and the thoughtfulness with which they were prepared and carried all this way. 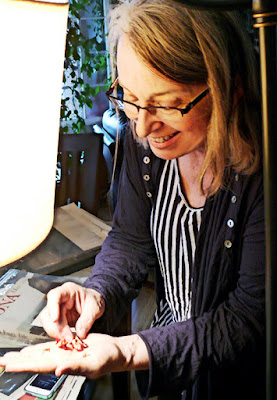 In addition to showing her the Halfland sets and puppets, I got to share Dare Wright's Lona (my most seminally inspiring and beloved work of art), talked about projects, told some personal stories, talked about people we have in common, had our lunch, showed her all the fairy finds made for my downstairs neighbor girls over the last couple years (above, she's enjoying the fairy shoes in the light), and gave her some woad. (You know, she needed woad! I know she did.)

All that in about 2.5 hours?! How is that even possible?? We wish we lived nearer. It would be incredible to share more, talk more, cross-pollinate our creativity. But until that happens, we'll have to be satisfied with a rare visiting, every now and again.

Maggie, you are amazing. Love you.
Posted by Shelley Noble at 12:10 AM