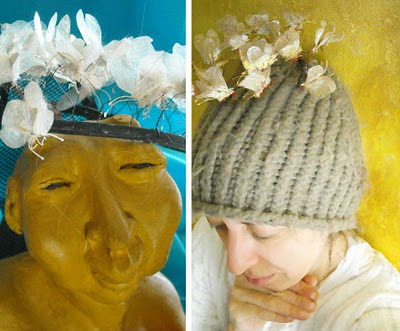 Seen on the Rana sculpt in progress and when all finished on me.

Putting Ice Resin on rice paper got me excited to dive into the small cabbage butterfly halo/crown that hovers around Rana's head in the film. It's meant to indicate that she is a sacred creature rather than a pagan witch (not that there's anything wrong with that.)

It's just that I see 1/2L. walks a fine line between occult symbolism and how I mean it. There are archetypal figures and loads of what could be described as polytheistic nature worship in it because everything in its nature is conscious and sentient. That association would be inadvertent. The characters and story come directly from my own imagination and are intended as an original folktale. In as much as these tales dwell in an imaginative realm, it can be said they tap into common mythology. But it is important to me that Halfland stay firmly grounded in beauty, upliftment, learning, joy, the qualities of a positive side of things. Hence the nearly-holy crown. 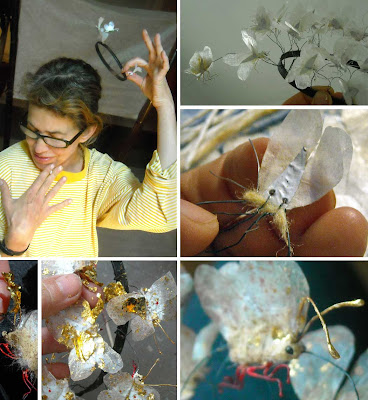 Constance started things off adorably by modeling the wire halo rigging I had prepared for her work. It was the flexible lip of a soft plastic take-out container, painted black, pierced and looped with two rows of 32 gauge black annealed wire. She then needle-felted fuzzy little moth bodies to wire the rice paper wings and wire antenna onto. I had tremendous fun gold leafing, painting, and speckling all 23 of the moths.

Each moth has a heavy foil "hinge" (seen well in middle right photo) that enables them to open and close their wings while being positioned in any direction by the wire loop attached to the plastic ring.

I plan to animate the halo separately on black velvet and composite it over Rana's head for a brief moment when we first see her standing. She also has spiders for jewelry.

Another thing the halo/crown does is to utilize the sacred nature-over-head device that will be used in later Halfland scenes during the Flowering Thoughts acts at the end.

It's so pretty almost everyone loves to wear it!
Posted by Shelley Noble at 8:36 PM