A few recently added reference images for making the Urhu, Serpent Sage Musician character for the end of the film series. He is a Magi of sorts, he is half mature male, half snake/serpent. The snake-like features on the women in the upper left photos will influence the character's expression. The dragon's scales, looking like very metallic gold "tiles" on an tarnished iron ground inspire me to the character's lower half texture. Except I'm leaning towards using a bright green metal feel with the gold. I think it'll look fresh and interesting against the orange sand.

Since Sherie from the Sea has helped me complete the entire last set in the production. The sand has now been stained golden orange, the tent is complete done finished, inside and out, including all the furnishings and props, the palm tree, the instruments, the mats he sits on, the floral prayer flags, et al.

With this done, we begin to create the Urhu puppet in earnest. 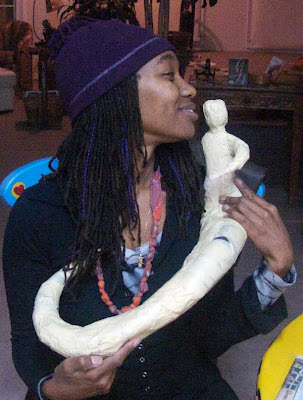 The last time Sherie came over (again with her beau David!), she began taping the understructure for the puppet's sculpture. She did a good job shaping his head to a proportion that suits both halves of him.

I haven't decided yet whether to make him as the other main characters, with clay/mold/cast, or to make him as a "build-up" puppet. A build-up would save me the effort of creating the molds and casting. But it would mean I'll have to jump forward and make his animation armature right now.

And yet he comes.
Posted by Shelley Noble at 8:53 PM