A Bee In Her Bonnet 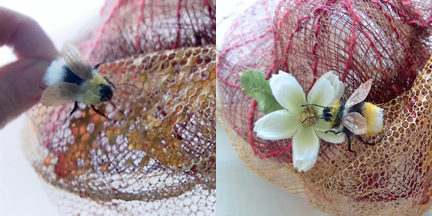 So I had this idea a few weeks ago to have Rana's hat that she'll wear while on the troop trip North to the desert sequence to have a big bumble bee in it. You know, an actual "bee in her bonnet" like the old-fashioned expression meaning to talk a lot about something one thinks is important.

I am very happy with the way it has come out. I used a single dogwood blossom for the bumble bee to sit on so that the bee concept would be easier to grasp and yet also make sense for it to be decorating a hat. It's that elusive 1/2L 50/50 half this half that balance. 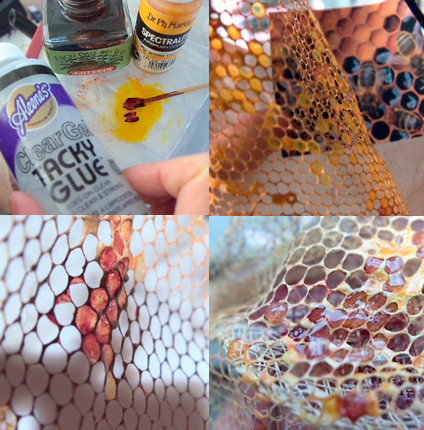 I wanted to carry the theme forward into the hat by making the veil suggestive of a honey comb. I painted tulle of the right sized mesh in a natural base color that matched my reference image (upper right) and began a lengthy process of layering up honey like filling for portions of the veil.

I tinted Aleene's plain gel glue with sepia and yellow ink to keep the material translucent. The final heavy with honey look was achieved (lower right) by touching a toothpick dipped in Diamond Glaze to several of the amber-colored glue-filled combs 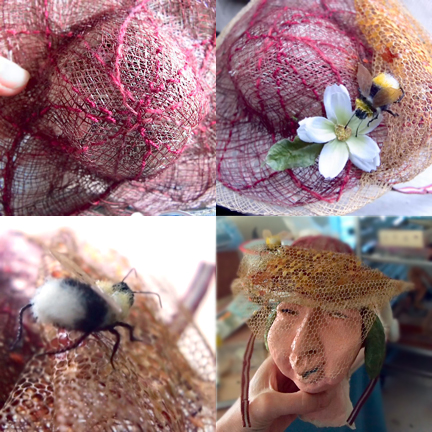 I started by making her hat from two store bought straw doll hats that were nearly the right size. I carefully wired them together to control its movement and painted the wire to match. I embroidered them together further with wool yarn and floss into a flower petal pattern when seen from above. This will foretell the same shape on the roof of the desert tent at the very end of the series. 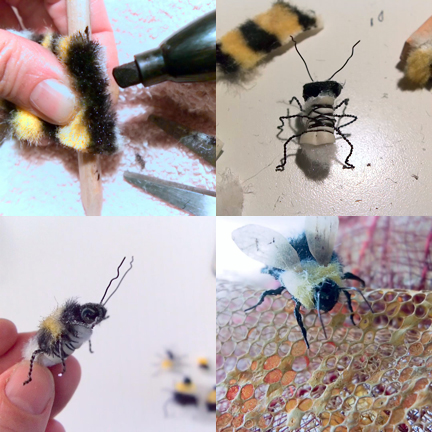 I set out to make the bumble by going to my bag of faux fur, trimming down a longish piece in white, and coloring his yellow and black stripes with fabric markers. Twisted black wire (32 gauge) wrapped around some bulk start the body. Wings were brown paper made translucent from Ice Resin (which I was disappointed to find to be highly toxic while in its raw state--something the sellers have refused to acknowledge to/inform their customers--by the way. I'd highly recommend using an honest to god, truly non-toxic resin alternative because of that dangerous dishonesty.) Resin makes most paper translucent and I'd saved a sample in my insect wing bag, so what the heck. I scribed a few lines into it with a sharp tool and stained them with walnut ink.
Posted by Shelley Noble at 6:00 AM