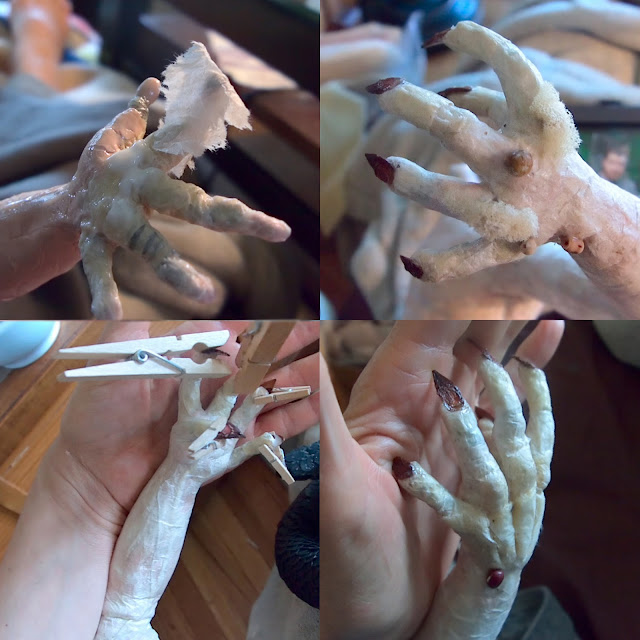 I could build puppets all day, Man. Actually, I do. For Urhu' s one-good-hand (the character only has a human face, shoulder, half--torso, arm, and hand. The rest of him is all serpentine.) Wired extensions to his finger tips were covered with paper and elastic glue. Nails made from star anise pod pieces were glued on, wooden bead knuckles, and further foam build out were all mâchéd in. Rolled paper and thick thread veins were added to the inside of his wrist (lower left) as the nails were drying on his finger tips. 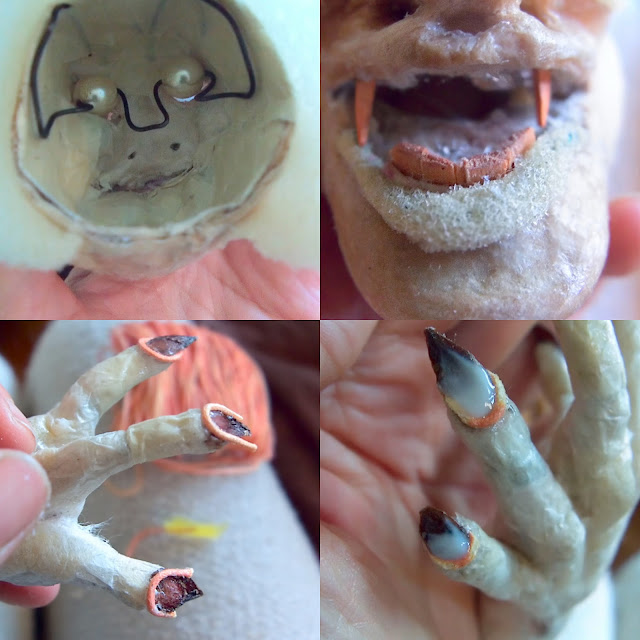 I crudely wired his pearl bead eyes into place with steal wire that was embedded into the face's interior. You may notice that I have the bead holes orientated horizontally in this case which will prevent this character from having any real eye movements. Fortunately, all he'll need do in his scenes is to perhaps glance upward slightly, which I can accomplish by rolling the beads from outside his face or I can ultimately alter them digitally, if needed.

In the open mouth seen above upper right, you can see that orange wooden teeth were secured into the lower jaw. (I've since removed the serpent fangs from his upper jaw because I don't need any further creepy triggers/associations with this character. He needs to be appealing and comfortable and yet also remain true to what his form essentially is... reptilian.

You know me, his hand looked fine (top photo set lower right) but I wanted better definition around his instrument-playing nails. I glued on fairly thick cording around his cuticles, secured them with more elastic glue all over when the position-tacking had dried, and then radically trimmed them down to as natural a feeling I could. I built up the nail beds with elastic glue which will later be made matte when he gets his final manly manny.