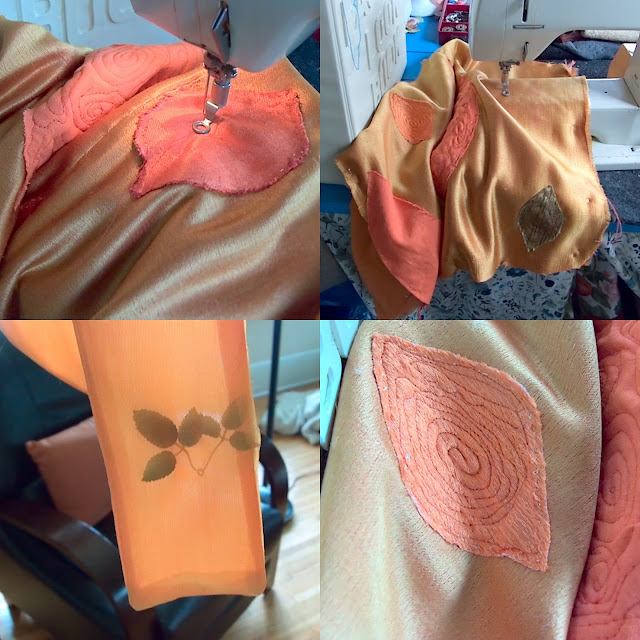 I have no clue where I got this piece of fabric, having a trace of memory that it may have been in a slew of things Constance gave me.

I'm using the inside of it, the "wrong" side. It was some sort of throw pillow case with a zipper and underneath these quilted applique reptilian/petal shapes are threadbare stars in wine. Covering them with colors from this character's palette, brings the whole piece, now stitched into a rectangle and lined in silk, into the realm of heavy, sacred, robing.

It's extremely thick and the way it's woven and never been exposed to air, gives it the appearance of liquid gold.

His turban, seen lower left, is made from a layer of opaque saffron silk and a matching sheer, both found at Mood.

When I stitched the two strips into a long finished band it seemed a shame to have two of the same color layered without being able to see there were two layers so I slipped pieces of dried grasses, twigs, a few faux leaves, and real roots in between them and stitched them into place.

Now when I wrap Urhu's head with it and the plants begin growing from it, at the end of the filmed story, they will subtly look as though they are emerging from a place of rich growing potential.
Posted by Shelley Noble at 8:31 AM