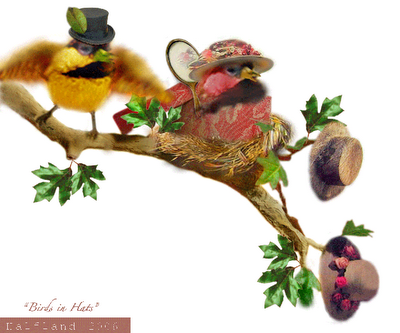 Inspired by Sven's storyboarding for his project, I decided a great way to start my mini-animation exercise for Halfland (as Mike had suggested I do) would be to sketch out the action, even before I begin to create the puppets. This is my first attempt to realize the Birds in Hats supporting cast characters.

I don't draw. My sketches are hybrids of photomontage and illustration. I can only illustrate with images in Photoshop. Making this sketch tonight was EXTREMELY helpful towards making the film. I thought I would never need to sketch or storyboard my project because it was just--me--after all, I didn't have a crew that would need the concepts communicated to them. HA! What about communicating the concepts to myself!!? So the biggest lesson tonight was that, yes, sketch everything, and further, storyboard the action. Preliminarily put it down on paper/screen sufficiently to be clearer about how to block it out on set.

Tonight I also learned about my little birdie friends here. What I learned, that I didn't know before making the sketch is...

That their little hats hang on the branch!

That the biggest hatbox sits in a natural nest!

They don't fight over hats like I thought but rather over the hand-mirror! This is obviously because they both look so adorable they each deserve to see!

The male's hat isn't decorated with a feather--duh. He decorates his silk top hat with leaves that he collects!

This is so cool. I can't wait to sketch out the action tomorrow!