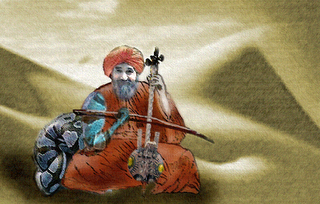 A first draft sketch of the Urhu, serpent musician character for Halfland.

Anxious to get back to Halfland progress, I chose to rough in a sketch of the Urhu character that I knew could be done relatively quickly. What prompted my turning my attention over to this character now was that I had recently found a line drawing of a Middle Eastern musician in the wonderful book that I'm enjoying about color. The sketch in it caught my eye because the musician was holding a very similar instrument to one I had bought in New York 14 years ago for this exact purpose. Seeing it answered an important question about how the instrument should be played for the character. When I bought the prop on the street or in a shop I didn't really know what it was but thought that it would be in the film.

The sketch above shows the line drawing from the book composed with a photo of that actual instrument I bought with some serpentine sinew added to this half wise man half giant serpent/musician. You may notice that his desert sandscape is shaped like the contours of a woman's body. The real setting in the midst of the endless stark landscape for the character will include opulently dressed tent and carpet where he'll sit to play his inspiring songs.

Making the sketch has helped me realize a few further things regarding the character. One, was an idea of how the human arm and serpent arm might actually hold and play the instrument. Another is that his serpent skin coloring can be in pretty hues of teal, turquoise, and violet. It showed me that I could have fun with his turban and robe in rich saffron colors. And that I might also embellish the instrument prop with a bit of gold leafing.
Posted by Shelley Noble at 4:07 PM