I Don't Do Math

Montage of the cottage progress by end of day. Things are moving along. 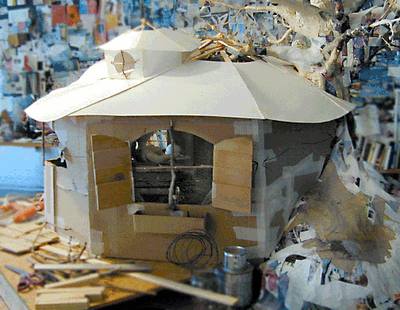 Another chunk of work. Double yay. The first thing to do was to set about correcting the angles of the little turret top walls. When I posted one of the photos yesterday I noticed that the vertical lines between the facets of the topper's walls were anything but (I corrected yesterday's image digitally but the way it was really can be seen below.) And, people, I do not mean to embarrass my American brethren by stating this admission but... I do not do math. As such I could not begin to calculate the parabolas or other high Euclidean geometry required to handle all the angles, slopes, and calculus of making this little roof loft/room. After trying several of my usual mathematic ape-like work-arounds, I finally gave up (further) and again consciously decided on what my method for creating the set would have to be. 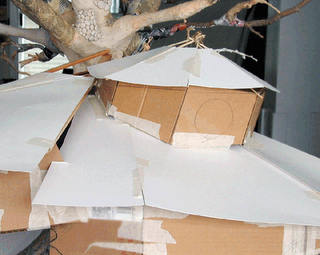 I realized that my technique would be to literally sculpt the cottage out of paper and board. I kept adding smaller pieces with masking tape to shape it around tree trunks and other odd characteristics. It really worked for me. Once complete, the perfected paper structure can be cut into template pieces and reproduced in other materials. The roof for example may become thatch matting or small wooden shingles, perhaps a combo of both. I tried out twigs as window mullions and began to form the beginnings of a porch. All kinds of serendipitous ideas for shooting the film came about through actually beginning to build the set and peering inside,--it's wonderful! Notions and details got fleshed out a bit more as the cottage was filled in further. I added more character to the roofline and raised an "eyebrow" over the bay window. And I finally got the topper how I wanted it, see top pic, far left.

It has been an invaluable activity to embark (hee) on actually making this tree set to scale. I realize I could have worked much of it out in miniature first, or on graph paper, etc. But I guess everyone finds the approach they prefer. Mine is to make a life size model out of paper/board how I want it and then employ other materials to refine the thing in a series of drafts. This is how I do everything, I just didn't see that before today. Perhaps if I did have the capacity to learn math I might have better tools at my disposal for accomplishing things. But I intend to manage, regardless, with whatever tools I already possess. 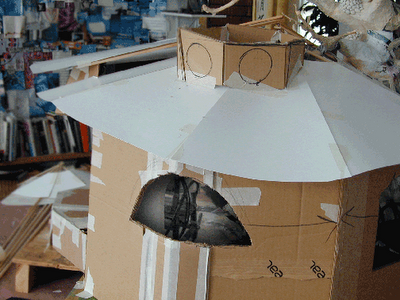 surprises of the day were the little faces that began to appear in the cottage elements.
Posted by Shelley Noble at 9:51 PM