Touring Tarn and Yearning for Yanu

The dark haired figure on the left, in this painting detail, shows how Tarn, The Crow/Raven Woman's hair will be styled.. 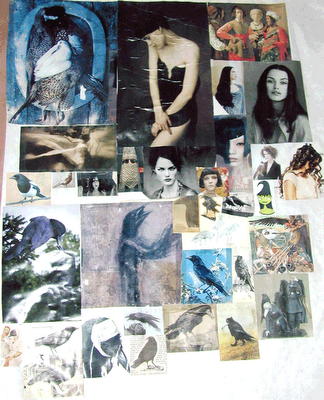 Above is Tarn's collage. She is black through and through, morose, depression itself, wounded and in anguish. She'll have the grace of a bird and the dark sharp gaze of a woman filled with the macabre. She will be a pale skinned woman on one side and the other a giant human-sized black feathered crow. Her face will be like a beauty's but with a nose that suggests a black crow's beak. One of her legs will have just been badly wounded by something as she arrives on her burden animal, a white hare with a tortoise shell.

This young male model has the strut, hair, chest and necklace of my Yanu. Just replace the walking stick with a giant bow and remove the jacket and shoes. I may even have him wear a sarong skirt like this, if I can't "handle" the nude male genitalia... as it were. 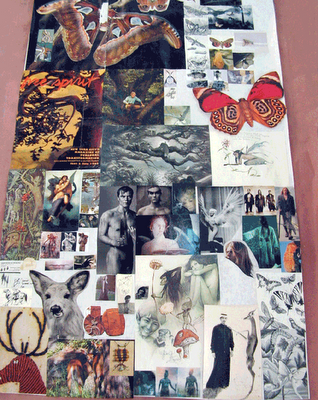 Yanu's collage panel shows various moth wing patterns at the top (I have several more on my wall collage as well as real specimens to work from), Wonderful images of figures in trees in the middle as Yanu will spend most, if not all, his time among the cottage tree's branches, below that, nude male figures with wings somehow incorporated into them (one taken from an ancient fresco I found while browsing around the Louvre), some clothed in Yanu style on right, carrying deer kills and bow and arrow on left.

Yanu is a young male Moth Man who travels through the forests of Halfland among the branches of the tree canopy. He is a master hunter with bow and arrow and kills without guilt. He himself eats no meat, opting instead for other insects and fungus. He laughs and delights in life. He represents the purity of male characteristics, protective, assured, free. 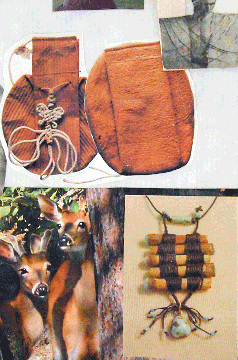 These are a closer look at the look and feel of Yanu's accessories, shown lower left of panel above. His leather pouch, his deer/kill, his jewelry. The necklace was something I saw on the neck of a young jewelry maker working in a bead shop in Fairhaven, Washington. I knew this kind of primitive, tribal artifact was for Yanu and she kindly took it off and allowed me to photograph it.
Posted by Shelley Noble at 5:38 PM