These are examples of the sorts of constructs this character will inhabit in an infinite desert landscape.

Urhu
Today's valuable collage (we understand these are not meant at all to be "artful" collages, right? Right.) is of a Halfland main character that only appears in the last act of our play. He is sage Serpent Musician, Urhu. 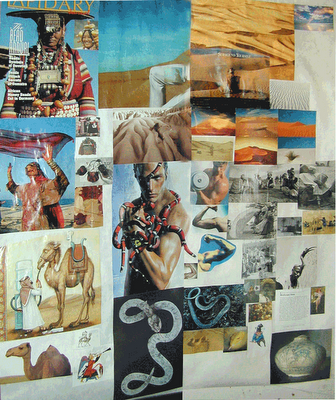 These references are arranged to show the endless desert scapes that will act as Urhu's set and setting in the upper right. Dunes shaped in spots like the soft contours a planet-sized female form. Mystical music softly greets our band of weary Halfland travelers as they make their way to his lone Arabian tent standing in the middle of literally nowhere. They discover Urhu seated on voluptuous carpets playing an ancient string instrument with a powerful muscular arm. The rest of his body is that of a large sinuous serpent's, like those in the middle here. His dress and ornament are indicated on the upper left.

He is wisdom, spiritual knowledge, experience. He communes with his understanding of existence as he plays his music, for no one in particular, save for those that come to him for counsel. He never speaks, as is true for all of the Halfland creatures, but he communicates everything with gesture and knowing eyes. 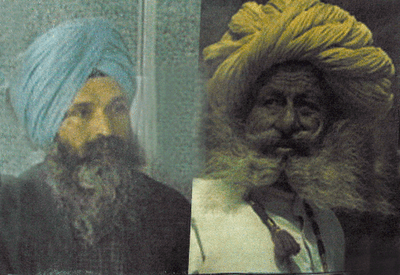 Urhu's turban headdress contain the Flowering Thoughts of inner joy revealed at the end of Halfland.
Posted by Shelley Noble at 2:07 AM