100 Days: Filament of my Imagination 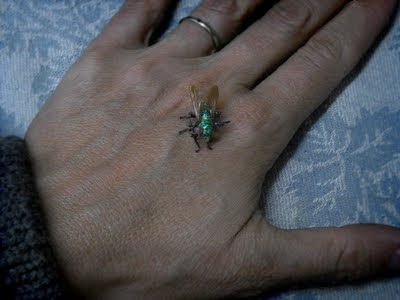 Waiter, there's a fly in my film.

As part of Rana's sewing box prop, I thought I needed to have a small version, at least, of a Time Fly sticking in it. Making Time Flys, or as Nick puts it, Musca Tempora, has been a real challenge for me before now. I had collected large amounts of various loose watch parts from online sources and then Halfland's Official Naturalist sent me tons of larger vintage pocket watch parts to work with. I had various grand plans involving building the flies out of watch parts but it wasn't coming together.

I had the thought a while ago to go back to the Halfland creative mojo and to make the flies as I had originally envisioned them 16 years ago. Using three perfect fly shades of metallic green filament and shiny pearlized green metallic pigment powder that I had bought way back then for the purpose of making these flies.

I started by tightly wrapping the filament into a shape shape that I then tied off with strong thread into insect body segments and re-wrapped in the bright filaments in stripes. The body was dusted with the pearlized powder which gave the whole thing the effect of being a real common housefly. So much so, that I kept thinking I needed to shoo it away forgetting I was making it.

The wings were real (I think either sent by HON Marci or weirdly found and collected by me along the way.) They were dusted with red/gold pigment powder in order to brighten their coffee color.

When I make additional flies, I'll be using much finer gauge wire and painting it black for the six legs as the jewelry wire used here is a bit coarse for me. Tiny milky red glass seed beads were glued on for eyes and then dotted with clear glossy diamond drop paint. The mouth piece is an actual watch gear glued in. Tiny hairy leg filamentous outgrowths were glued on paint brush bristles dyed black with sumi-e ink. 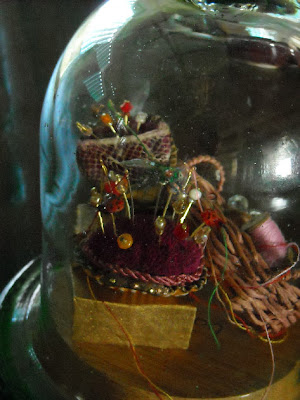 As part of Rana's fabulously detailed seashell sewing box, Halfland's first Time Fly would look wonderful one day under a glass dome display as part of a exhibit on the film.
Posted by Shelley Noble at 3:57 AM