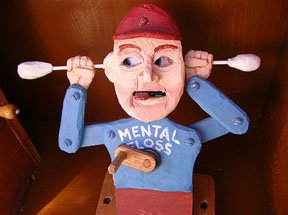 I just swung past Phil Dale's Fund My Short site where he gives a big hint about his plans for his newest animation short, Henry and Martha. It sounds great. He also shares an interview (sourced from the one day of Rocket Boom I missed) that features a great interview with filmmaker/animator/automata maker, Ernie Fosselius. I dare you to watch how this guy works and not be inspired to get into your workshops.

Excerpt from his wiki page:

"Fosselius' film career began in the early 1970Â’s when he co-created 20 original animated films for Sesame Street, he's best known for his classic Star Wars parody Hardware Wars. ...In recent years, Fosselius has retired from filmmaking and has taken to whittling mechanically animated carved caricatures and automata which he displays in traveling galleries called the "Marvelous Mechalodeon" and the "Crankabout Mechanical Theater", an entirely human powered exhibit."
Posted by Shelley Noble at 12:35 AM