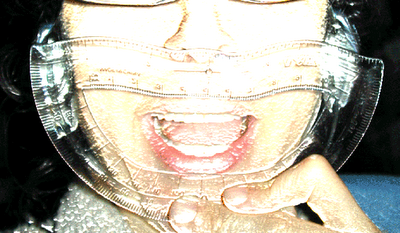 HOW TO USE YOUR NEWLY PURCHASED PROTRACTOR:
(suffer along with me, won't you?)

1. Find the center hole on the straight edge of the protractor.
--Check.

2. Place the hole over the vertex, or point, of the angle you wish to measure.
--Huh? You mean the point of the peak where the beams meet?

3. Line up the zero on the straight edge of the protractor with one of the sides of the angle.
--There's no zero on this protractor, but I can imagine where the zero would be if it had one.

4. Find the point where the second side of the angle intersects the curved edge of the protractor
--I'm lost. I don't see how the second beam would intersect but when I follow the instructions I get 45 degrees anyway.

5. Read the number that is written on the protractor at the point of intersection. This is the measure of the angle in degrees.
--Yeah, that's what I'm after apparently.

Today I taped the roof into one piece, labeled the sections and wall positions, and then removed it from the cottage in one piece. I then removed and discarded about half the amount of stand-in beams to minimize the support beam number in the final design. I can imagine this will look very good when the real beams are cut and installed. I'll ask Clare if he'll help me get the measures so we can cut these here beams.

I also managed to pipe a bunch of leading whips. I found that adding a thick transparent "window color" (the kind that can be peeled away when dry) to certain diamonds in the lattice gave a pretty good facsimile of poured glass. I learned from Rik Pierce's method to add more depth of color to the leading by adding flat black and pure silver to the intersections. This improved the effect greatly.

I double leaded the sample panel and have to report it works so well--I'm satisfied with this technique for the cottage. In fact, I love doing it. I plan to do different Tudor patterns on the other window shapes and even to incorporate special glass items to a spot or two with this method. Whew, what a relief.
Posted by Shelley Noble at 10:16 PM