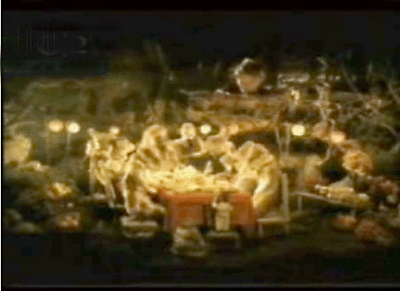 Our new friend, Michael Granberry at Red Hatchet Films just brought a 2003 music video to my attention via his comment at Grant Goans' OAR.

It's a music video entitled, "There, There", directed by Chris Hopewell for Radiohead's 2003 album, Hail to the Thief. (This took a bit of doing to find out.)

It strikes me as a loving and inspired homage to Starewitch's, Fleur De Fougre (clip 1), that I just happened to be watching again the other day at Darkstrider's Brilliant Clip GalleryYou'll notice it immediately when you see the pseudo-rig-look running sequence. As a matter of fact, the entire film is to me an ingenious reproduction of stop-motion puppet movements. And can we talk about how much work must have gone into animating the huge animal tea party scene!? I think our forefathers would be proud of everyone who worked on this wonderful fable film.

UPDATE: On further viewing, I find You tube's clip to be far clearer and without annoying rainbow banding artifact while iFilm's can be viewed larger.

It's the closest thing in spirit to Halfland I've seen yet and I loved the little house in the tree, the lizard/frog creature rolling by on his bicycle in the foreground especially. I saw at least one face profile in the negative space created between the trees of the forest. (But then again I've watched it 10 times already.)

(Wikipedia sites that There, There's director's inspiration was a UK stop motion telly show, Bagpuss. However, I suspect that's a misguided assumption. But still, it seems another cute, successful stop-motion series to know about regardless.)
Posted by Shelley Noble at 9:51 AM