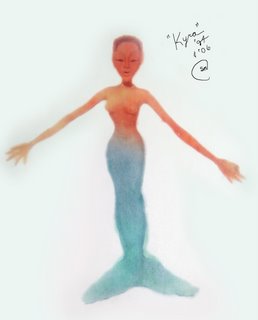 This is a sketch for a beautiful main character, Kyra (black-mermaid). It is based on a photo of a 16" maquette sculpt done after a life-sized Kyra (photos shown below). The larger puppet was cut into pieces and Ultracal 2-part molds were made of each piece years ago; head, torso, right arm, left, fin (not as in foreign film but as in fishywench.) The smaller sculpt was kept whole and a 2-part Ultracal mold was made of her as well.

The plan was to use the large, perfectly detailed and finished, puppet as a rod puppet--not stop motion, on location at a soft sandy shore location here in sunny California. It would have been just be enough glimpses of certain of her movements to establish her nature and allure before she disappeared under the surf to take us through an underwater doorway to Halfland. The smaller puppet would be used for the stop motion in a small underwater set and when she arrived via nearby stream to Rana's cottage. I say the plan "was to" because the large front half of her torso mold was "lost" during our last move and I'm re-thinking the necessity of creating the full-sized puppet as a result. 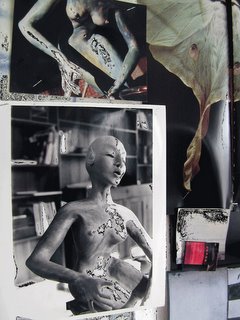 New York, late 1992, Kyra's head was the first thing I ever sculpted and it was the first thing created for Halfland. My life was utterly changed at that time by a gift. Despite any rational reason I found myself working on building ravishingly gorgeous props and set pieces with hugely talented artists. The Chelsea loft was rented for a couple days longer than the production required and the technical director offered everyone the space to work on their own projects. In that flash Halfland entirely occurred to me.
Posted by Shelley Noble at 12:54 PM