Keeping An Eye On Me 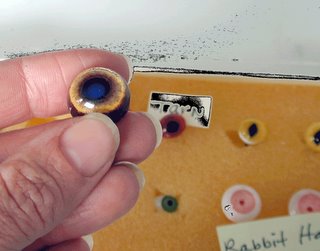 I bought every single thing I would need to complete Halfland while still living in New York. Let's face it, where else on earth could one go to an eyeball store?! These are the most amazing hand-blown glass eyes I bought from G. Schoepfer, (212) 736-6939 for the various characters.

From the comments, a couple of times:
himself said... "This is getting really exciting. When does shooting start?"
You all see what I'm dealing with?! Actually, I really appreciate the lack of slack.

You sir, are a taskmaster. I am looking into how to post video clips on a third party site and I will start shooting after I fill in the script outline from yesterday, a very helpful exercise, and move the windows around on the temporary walls.

I'll cut a piece of paper out to stand in for the Rana character and then I'll rig up some temporary lighting and begin shooting with Mike Brent's Unibrain Web Cam of Joy on a tripod and my Nikon Coolpix 950 propped up on and taped solidly down to a work table. I'd like two streams of content to edit together later.

I'll say Sunday, if not sooner.