Slow Build Up vs. Action Only© 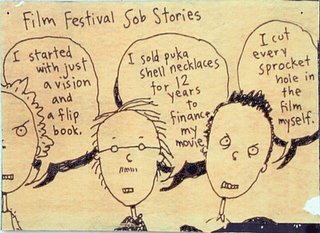 Had to share, this cartoon says it all. I found it in a New York paper right after I decided to make Halfland in 1993. I've lost the cartoonist's name I'm afraid, but it's such a brilliant, insightful peep into the mind of us looneys. First guy says, "I started with a vision and a flip book.; Next guy says, "I sold puka shell necklaces for 12 years to finance my movie." and the last guy says, "I cut every sprocket hole in the film myself." I laughed outloud at the hard truths this little gem exposed in me, even back then. But I thought, "Not me!" Ha.

So here's what I've learned straight off with this new (to me) "doing" rather than "planning" approach to producing these projects of ours:

1.) A Plog is gold. This is the way to go for me. It's got me engaged in the project in daily real action as opposed to very exciting but ultimately worthless mental pictures and thoughts. Doing is good--and I had no idea how much of a push forward logging some of it would do.

2.) After twelve achingly long years of thinking about this project, adding daily ideas and image clippings to the files for each possible aspect of the film, being excited by imagining how the film could look... I was going about it all wrong. I can see already that laying out the script with both eyes on actually having to shoot it before building a single thing is, unexpectedly to me, a by far more effective approach. I thought that grabbing bits of time here and there as able to build what I could until everything was ready to begin some disconnected concept of filming would be fine, 40 years in the making--if ever--but fine.

Maybe the slow build works well for developing concepts and ones sense of what to say. Maybe I had to gather myself to a point where I not only knew I wanted to work with stop motion and create a folktale like Halfland but also to have a greater perspective on what, how, and why I wanted to do it. Maybe I had to wait for himself to buy the magic clue that I couldn't see on my own. Time has a way of putting everything in place. I see that I could not have done this project for real any sooner than this moment. I owe the wonderful Mike Brent and the SMA boards (http:/ www.stopmotionanimation.com/) and a sea change in the democratizing of independent filmmaking with my being able to see things moving ahead in earnest. Finally, sheesh.

Looking at the same project through an Action Only© (:-}) approach has made important details about how characters should look (and why) newly obvious to me. I'm finding that thinking it through is providing far more "thought through" results.
Posted by Shelley Noble at 3:30 PM