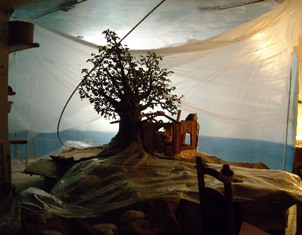 Sneak Peek: Glacially slow but steady progress is being made on the main set's backdrop. It's happening. When I'm not overwhelmed, it's actually a little fun. Hoping to give a big reveal over the weekend. Take good care.
Posted by Shelley Noble at 12:19 AM 11 comments:

Just by varying the lighting a bit, it's possible to alter the skyscape dramatically. For rain clouds, backlight, for sunset, blush pink gel on key light, soft daytime, light the far backdrop with a diffuser and hit the front too, and night time's moon glows just right thanks to a spot on the far back with no front.

I'm still working to install the sky backdrop, however, I wanted to give an update on the successful cloud scrim test made today.

I'm on a Halfland Retreat and haven't left the house for days, heavenly. And I only had on hand a small swatch of clear plastic drop cloth to try out my concept for an "infinity" backdrop effect.

I found it much easier to paint on the plastic than I thought it would be, especially after I got the knack for doing it after spilling half HA! the jar of precious Phatho blue paint on the floor last week. I found that wiping it up with a wash cloth left the most perfect transparent layer of blue tint! But I digress. 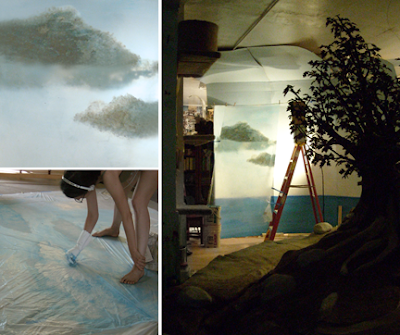 I sponged on white house paint and painted over with matte medium then tinted the scrim casually with a pale hint of blue. Not knowing how it would look I touched up any blank areas with additional white, etc. I might ultimately go more translucent on the clouds on the final scrims. But I was completely stoked and thrilled with the effect, even with this quick test.

The concept gelled as soon as I got the idea to DOUBLE the plastic scrim to further blur the flaws and offer myself much more in the way of animation of the clouds and changing the time of day.

I plan to buy a couple of large 20' x 30' clear plastic drops and light weight connectable tubing track to string them on, install ceiling and floor, with a pull string attached to advance the scrim every so often, thus moving the clouds slowly during the filming. natural and yet hand-painted. Perfectly what I was hoping for. I'm dropping the idea of buying a stage scrim this is working so well for a 10th of the cost.


I'm surprised and thrilled with these results.

Now, if I could only get the far backdrops up properly!
Posted by Shelley Noble at 3:18 AM 24 comments: 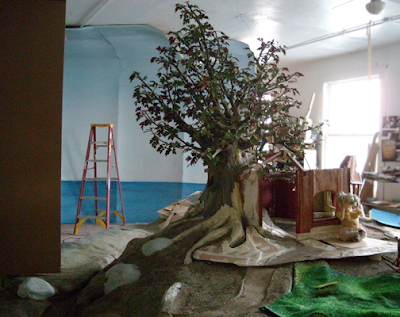 In the last light of the day Paul and I were able to manhandle one of the three sky backdrops roughly into place. It did not assemble as well as I had hoped, the cardboard panels all wobbly and uncooperative. I never could have muscled it this far without Paul being home on a staycation. I wanted to get one of the three up in an approximation of place to get an idea of how to install the other two. I next need to attach the panels to the 2x2 uprights behind the above, smooth out the curve from the vertical to the ceiling, maneuver the curled pieces into a position where they appear seamless, re-fasten the panels on the ceiling, and do something with them to hide the seams up there as well. Then repeat all that twice more. The cardboard panel on the left, covering a support column, will be shaped and painted like a stand of trees, flat paper trees. The other two backdrop skies will stand to the right and wrap around the set more than half(HA!)way. 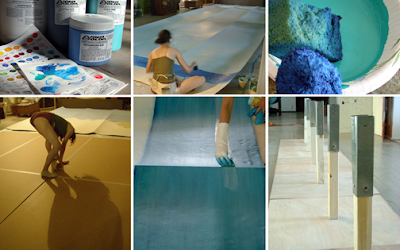 The great news is that all three "far" backdrops are painted. These will be the layer behind the mid-ground distant hills. There will be a scrim layer hung in front of the far backdrop that will have clouds and a pale blue tint painted onto it. That's the plan. I'm hoping to soften the distance, obscure the seams. I still want it to look obviously hand-painted however. Halfland should be an almost realistic/hand-painted world.

I splurged on the ocean for inspiration/courage and went to my tiny favorite place for art supplies in LA, The Nova Color Factory Store. (They ship to entire US and Canada, treat yourself when you next need paint!) The best quality, the best colors/pigments, the best price in the history of art. Much more useful to see their actual swatch sheet (seen below in upper left box under ocean swatches) My booty, Ocean perfect rich and lush, 115 Phthalo Blue, ocean perfect turquoise, 142 Blue Green, and ocean perfect 199 Fluorescent Blue. I mixed them all with matte medium after I rolled on free sky blue house paint onto the rest of the backdrops. I kept building up the layers with transparent washes across a total of nine boards. Note the natural curl in the cardboard in the upper center, I'm still hoping to exploit that into a curved backdrop result.

Yesterday I devised and constructed six upright supports for the sky (seen lower right box). I had plywood cut down to 22" squares for the bases. I cut down a length of 2x2 to act as risers for the struts, hand-cut and formed connecting cuffs for each out of strong aluminum roof edging. 8' lengths of 2x2 get attached to the seams of the backdrops and then slide into and secured in the cuffs. This raises their support past the 8' break in the double decker backdrop. The cardboard was pre-scored in order to make it easier to gently curve it at the top. I'm hoping that when I get it installed properly that the join will all but disappear.
Posted by Shelley Noble at 9:04 PM 16 comments: