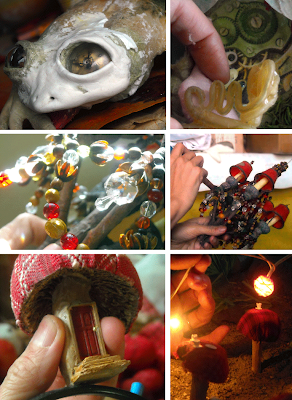 Been working on graphic projects, a years' worth done in a few weeks, and getting more done on Halfland than in a year at the same time. Loads of solid satisfying progress and ideas gelling together. These photos only hint at what fun's been going on over here.  Just couldn't wait any longer to at least give a peek... Details, if important?, later on. That's the plan. Hoping you all are well!
Posted by Shelley Noble at 3:42 AM 18 comments:

How will I ever catch you up? Puppet Building Underway 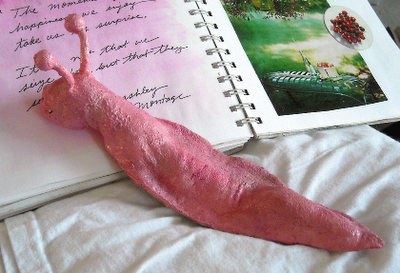 Finally, after many long years, I finally have an animatable Pink Snail puppet completed. It's all entirely flexible and can ripple at the edges.
Two important things about this post. One is that puppet building has commenced in Halfland in earnest. Making the Koi puppet from foam ignited my ability to make all the characters EASILY! EASILY EASILY! No sweat whatsoever, just the fun parts. The four main characters will still be cast from molds (more on the wild method/material solution I've been using in the next posts), but now the rest of the cast won't be. Heh.

Using the build-up method instead is not only knocking out these long-standing puppets but also giving me a chance to test material and techniques for the more featured puppets later on. 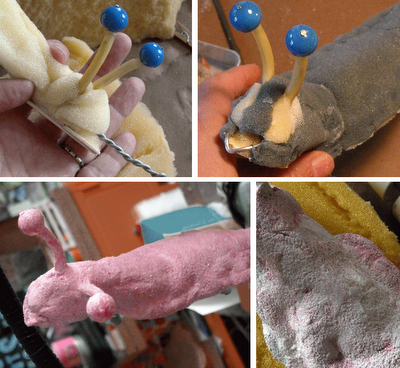 Built around two tie down points, this foam fellow has twisted wire inside its length (finishing at the lower lip loop), and metal gutter mesh on the underside all the way to the fluted edges of the sides. I used two glass beads for the eyes, from a pair of earrings Cirelle donated, secured into rubber tubing eye stalks filled with wire. It's all one piece deep within the wooden head parts. The top layers were paint, flexible cement, and heavy gloss medium.

It's embarrassing to say, but I'm choosing to say everything here just as-it-is regardless. It's not deeply meaningful or anything profound to me, just a throw away subconscious joke, like the Knitting Beetles, or Lightning in a Bottle, etc., but the Pink Snail with the home on her back, is partly meant to be female genitalia-like, as well as just storybook sweet.

When I was young, a girl was joking about girls leaving snail trails if they were dragged along (I know, sorry, but it stuck in my subconscious), and the whole sort of slick glossy pink undulating flesh thing that snails are, added to the feeling. The shape and two ovary/fallopian tube-like eyes cinches the metaphor for me.

I was really worried about having such an overtly sexual element in this (notwithstanding Yanu's visible hoohah and the whole snake/male muscle deal with the sage.) I think I'm a prude really. So as I was making the puppet above, I thought of changing the color to a more realistic color and avoiding the whole treacherous vagina idea... then from the Weirdness Dept.... as I started to paint the finished puppet with a WHITE base coat [see lower right above], W H I T E mind you, no color at all anywhere on the brush, water, table, etc. it brushed on PINK!!!! On its own. I swear it's true. The pale color pink you see in that photo appeared on its own. I took it as a sign to go ahead as I'd always intended and I just went for it, even telling you all what she/it represents here. So, there it is. 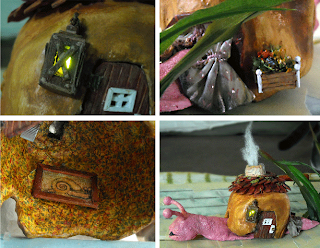 Probably the best news is that I not only finished the puppet at last, but also her house to a 100% level.

I rigged her porch lantern with a yellow painted balloon LED (My favorite little special effect trick b/c they're so cheap and easy--that's doesn't sound right given this post). I painted her window box with more colors. I added fiberfill smoke wisps to her chimney. And although it won't likely ever be filmed, you should know that inside her tiny floral wall-papered house is a painted portrait of her mom.

Already begun construction on the large scale garden path near the cottage for her to lumber through in the evening rain.
Posted by Shelley Noble at 4:58 PM 19 comments: Last Friday was a very special Girl Friday. Not only could Cirelle make it, but also Nancy and Sherie! They all rearranged their schedules (one took a half vacay day!) to generously contribute to Halfland. They all have worked together in the past, get along fantastically, and are glad to see each other here. I can't describe the boost they gave me and the project by coming en force and launching the "Big Planting" of the set. 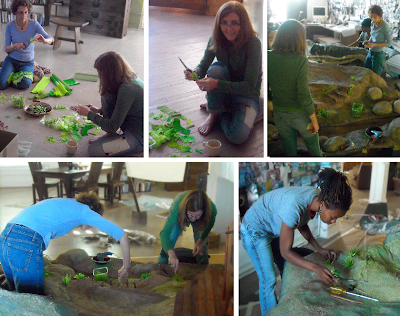 Cirelle & Nancy car-pooled and arrived for the first few hours of the day to have lunch and start cutting the crepe paper greens into beautiful grass fringe bundles. Then as Sherie arrived, it was time to start planting the tufts. Each Hommie was given a set of gardening tools to poke a hole in the set landscape, hot glue a drop in the hole, and hold a bunch of blades in place until secure. Immediately I noticed how much a few sprouts made the whole terrain come alive.

A lot of progress is happening here that I hope to get to post soon, all while I'm otherwise busier than ever as well. I have to think it's the quality of these extraordinary people lending their refined energy and support that are helping to make things happen. 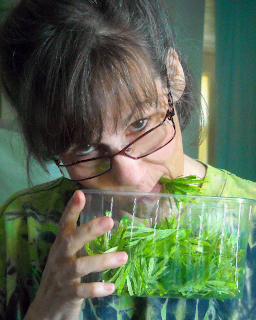 In one of my favorite photos for the blog, Downstairs Jean, an avid Notes reader, shows off her wacky sense of fun perfectly.

AS if that wasn't enough, our fabulous downstairs neighbor, Jean, allowed herself to be kidnapped for a bit for grassing purposes on Monday as well. She made ideal turf tufts and planted a wee hill with them. While she was here I got to brain storm methods and materials for blending these tufts into the bare soil easily so that less tufts will b e required to get the effect over all.

I used bleach and other mediums to try to manipulate the crepe paper blade tips. The crepe paper looks great as grass. The texture, the tensile strength, the loft, the light translucency, all conspire to fool the eye in the right way.

Be careful everyone, if you live anywhere near Halfland you may find yourself helping to build a tiny world.

Thanks to all my Tuft Tuffies, Halfland Hommies, Poking Pretties, Hole Hens, and Wild Grass Gardners. You all make mounds of joy.

(*So named after Nancy mis-read my "Welcome Halfland Hunnies" message on the kitchen chalkboard! Loved her version better!)
Posted by Shelley Noble at 2:03 AM 2 comments: