Began to make the Halfland pupps in earnest by visiting Hiromi Paper in Los Angeles, one of the best selections of Japanese washi known to humanity. Luxury at affordable prices, depending on what you're after. I was there to get a few sheets of what I'd been calling "rice paper" for the outer skin layers in the mache-in-mold technique. I was set straight by a young man working there that only ignorant white people would assume that washi (Japanese for paper) must be made of rice. That in fact nothing in the shop would be made with rice except the starch glue. In fact, the papers I had selected to buy were made with a relative of the mulberry plant.

Whatever it's made from, washi's strength when whetted and malleability/moldability makes it irreplaceable when it comes to this method. Don't be concerned about the delicate pink seen above when home on far left. Even after used 3-layers thick and intensified in color in Rana's face mold, I intend to use it as her skin undertone. See how sheer, yet sturdy washi is, with Nova Color's Matte Medium, on right.

I laid in two more layers of heavier washi behind the pink to stabilize. Used masking tape to secure 1/16" Amaloy wires into the lips and brows. Slathered the interior with Aleene's Fast Grab glue, filled the lips and brow hollows with crumbs of blue neoprene foam bits to keep them fleshy soft and expressive.

The blue foam was held in place by a layer of ultra thin spongy foam glued down. I used a plastic bag filled with sand to weigh it all down, while in the mold, and then smashed the bag of sand down with pressure from heavy books and a kettle bell weight (don't tell Paul, he was out of town.)

What gave me this soft fleshy foam portions in the rigid hard puppet face idea was two things; one, something Justin Rasch said in the Q & A at his movie premiere. That he liked to keep some parts of his character's faces in clay on top of their cast foam latex, so that he can extract more expressive performances. That remark really got me thinking. And second, when I made Rana's ears (above right) from shaped foam rung with wire and mach'ed over with washi, it was a revelation. They behaved like animatable flesh and had the right rustic look.

The ears were installed and will add nice additional reactions to her facial expressions. A second large horn was sculpted from light weight air-dry clay and their positions around the ears were determined. Her mouth, nose, human ears, and eyes were then sliced and hacked open all the way through. The wires allow the range of expression seen in the top image in this post.
Posted by Shelley Noble at 11:50 PM 2 comments:

Justin and Shel's opening remarks and closing Q&A were filled with wisdoms, truth, and kindnesses. No surprise there, that's their style trough and through. The nice-sized theater was filled with family, friends, and fans. Christine*! and I drove out there together and Deborah drove up from 2-hours away to attend. "Crick" (short for Christine) brought them magic homegrown tomatoes from she and Mano's garden as tribute.

The lobby was set up with spaceships, set pieces, puppets, and props from the film, crowds mingled, oogled, and awed. Christine and I stayed in town for a nice lunch together and then road tripped it on home very happy to have been there for the show.

Once again Justin and Shel have made their premiere about sharing the moment with supporters in thanks. It's one of the coolest things they do. The audience who could make it there in person were primed and pumped to show them how much they are loved and admired.

It wasn't about showing off a film because it's the state of their art. Often these long-term independent productions cause the makers to grow and learn so much, they no longer fully represent where they are in their film-making skills but rather, like an art piece made long ago, show where they were at the time.

Dogonauts was the most complex storytelling the Raschs had yet attempted. There were fantastic montage sequences, extended well-choreographed fight scenes, and as always with them, meaningful, important points being made through the visual tale.

All of us were glad when one of the audience members stated perfectly to Justin and Shel's faces how well they succeeded in telling their story without any dialog and within a fully realized universe they had built.


Before the main feature, the sensational shorts they screened delighted and inspired. Many of the film makers were in the hizzy as well.

The MOUSE THAT SOARED by Kyle Bell
Incredible directorial performance whose result compresses all the humor
and warmth ever animated into a few minutes of pure genius.

DANCE FOR YOUR LIFE YOU PUNY HUMAN by Justin Connolly
A warmly charming handmade short with excellent comedic timing.

as well as Shel and Justin's first film, the endearing heart-string plucker, GERALD'S LAST DAY
which should be mandatory-screening at the front desks of every animal shelter in the world.

(*Some of you sharp readers out there may notice why I *may* have asked Christine to pose sideways to emphasize her hull being not unlike the flea ship's! YES!)
Posted by Shelley Noble at 7:50 PM 4 comments:


Found this on Cute Overload today and sent it round to my stop mo friends, "Admit it. You thought I might be crazy until you saw how NATURE IS WAY CRAZIER!"

Shel Rasch replied hilariously, "Maybe you should admit that you made that!

(And that you hand dyed each hair with teas made from rare Turkish root vegetables that you grew on your deck in pots you repurposed from vintage coffee cans that still have the cool 1950's labels on them.) 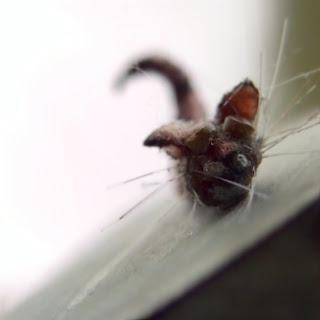