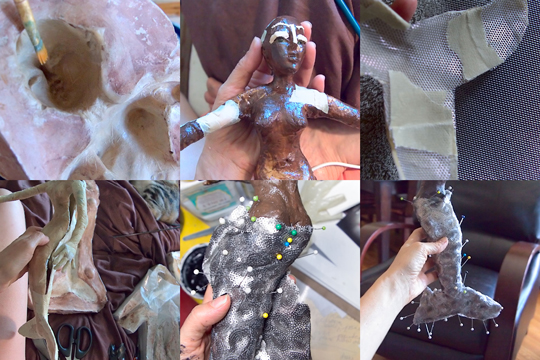 Catch up on the Kyra puppet making techniques, first the Nova Color Flex gel (a thicker, glossy version of my beloved Nova Color Matte medium) is layered with plant fiber paper from Japan directly into the mold of the small scale mermaid character.

The interior of two cast halves are lined with expandable metal mesh (initially placed with masking tape and then paper mache'd in) then joined together around wire armature and random felted wool stuffing (whatever was within reach from the couch).

The formed puppet was then given a base coat of burnt umber color before being refined with sports foam tape and other details like eye lids. Her eyes were tiny hand-blown glass doll eyes purchased in NYC for her over 20years ago (!)

Her fine sequined circular swirling scale fabric (details below) was adhered to the puppet with tacky glue, held close to the surface with straight pins until dry. 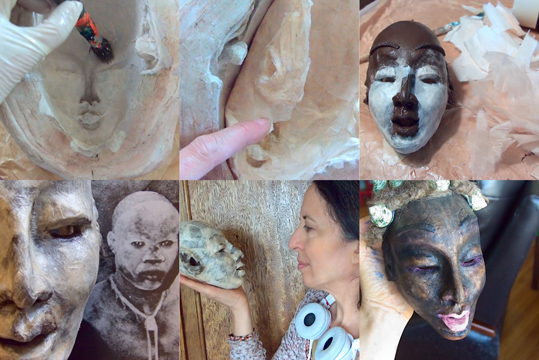 I swear, I wasn't going to bother making the large Kyra puppet after the mold for the bulk of her torso (Shoulders, breasts, waist, and hips) were stolen several house moves back. But I felt frustrated that the small scale puppet, with very little facial detail, was all there would be if I didn't, and it was turning out well. So, the same method and materials was used on the surviving molds for the large sculpt of her. (Please see the original fully finished modeling clay sculpture here.)

In the process, after her facial details were altered to affect more Negro racial features than when she was initially conceived were added, I noticed that the plain plant fiber paper layer used to smooth out the additions was strikingly like several images in Leni Riefenstahl's masterpiece of a photographic essay called The Last of the Nuba. (The book is filled with extraordinary images that the important film director recorded while living with the remote Sudanese tribe in Africa between the years 1962 and 1969.)

I found that I have decided to work WITH the paper's natural handmade looking texture rather than trying to make the puppets look like living creatures. I want the entire production to clearly come across as made-by-hand from the grass to the bugs to the main characters living in the handmade world. So you see above lower right how I left the mottled umber base color as highlights to the rich brown/blue/black was in her shadows.

The large face will be finished with hair and shells and used for close-ups. 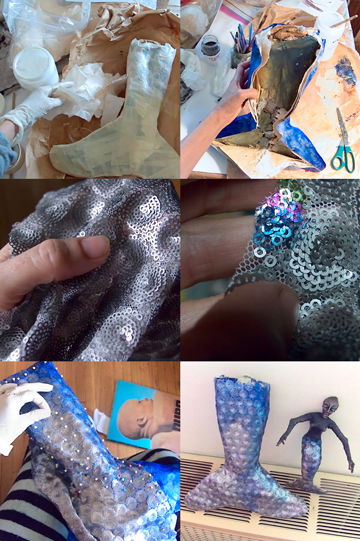 The large tail was finished in the same way as the small. The difference being that I used the 20+ years old clay sculpture as a base for the paper mache skin without first making a mold of any kind!! Upper left shows how I used (my essential) masking tape as a first course over the soft oil clay, with dust and all left on, and then built up about eight layers of mache skin, including one of expandable metal mesh, then more paper then paint.

Upper right shows the paper shell being sliced open, peeled back and the ancient clay sculpt being discarded forever. Next is the $80/yard (bought 1/4 yard which covered both scale of the puppet's tails exactly.) Middle right, shows some initial color tests with permanent marker. Bottom row, shows the large tail's metallic skin being glued and pinned on to dry over the low heat of our wall furnace's pilot light, where most things are set to dry out well. The ultramarine blue tinting on both puppets is just to get the color ball rolling and will be further developed with pale aquas and soft pretty blues as well. This tail piece will be used like a hand puppets at a live action real beach as the character's tail will be shown disappearing under the surf.

Next up to show you is progress on the finial mothman and crow woman pupps....
Posted by Shelley Noble at 5:46 PM 6 comments:

MAKE ALL THE PUPPETS AT ONCE! 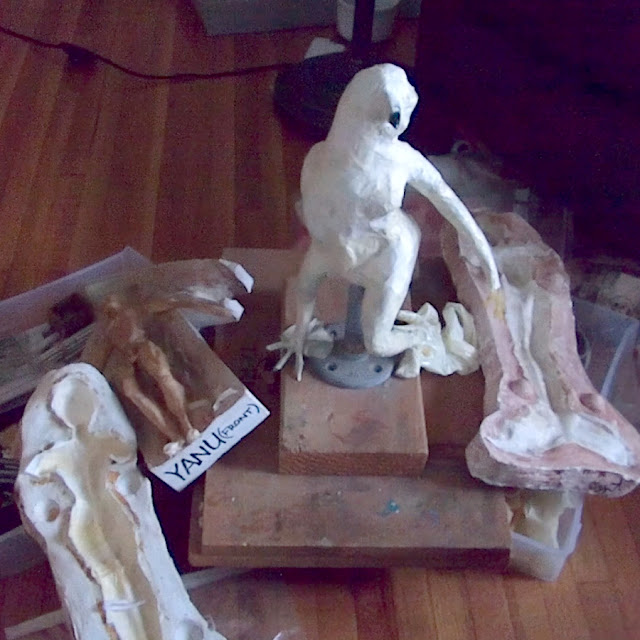 A tumble of creatures coming to life; Tarn crow woman, Yanu the mothman, and Kyra the black mermaid (big and small) take shape in plant papers.

A violent need to get these puppets done has taken me over. I am currently building all remaining character puppets at the same time!

Things got wild. In the fury I ended up using flexible medium mache directly over the sculpts made decades ago--without the use molds of any kind. Would that work? Yes, it does! No one more surprised than me.

Stay tuned for details on the techniques that have emerged as my own signature stupid method. It involves...  Poseable Skin

Posted by Shelley Noble at 1:19 PM No comments: 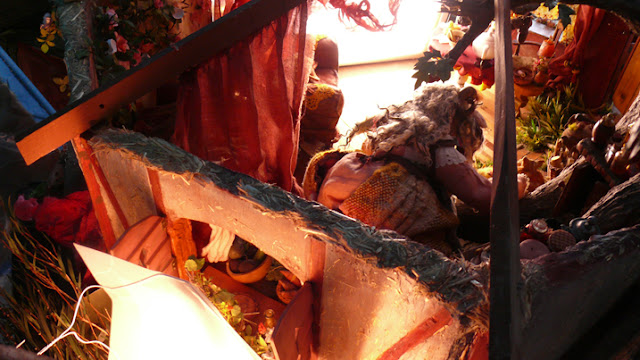 Showing you behind the scenes for the lighting set up on the cottage interior for the new banner image seen at the top of the site.

Been taking lots of shots of Rana on set to begin to get a feel for what works.
Posted by Shelley Noble at 11:41 PM 7 comments: 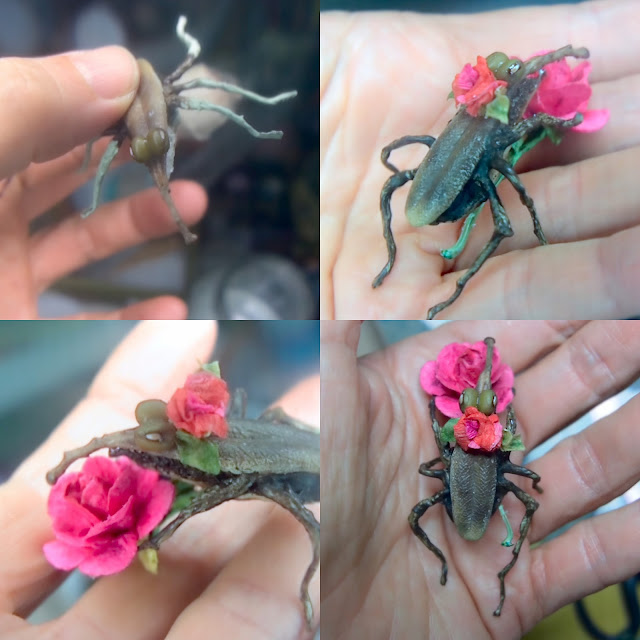 I have been making bug puppets in-between other larger puppets, kind of like little palate cleansers.

This fellow started by a preserved leaf that became his body, twigs that became his legs by wiring into a foam body. His beak is a stem, his eyes are tiny natural seeds. He's bringing festive flowers to the wildly fun gathering.
Posted by Shelley Noble at 9:10 PM No comments: