Just a quick Note to show the range of dandelion sizes in the many Halfland sets. On the left, the micro-scale dandies in front of the cherry tree on the Writing Mouse's property (with my index finger for scale). On the right, the jumbo-scale dandies with an actual fly sitting on the flower (a real fly, not one of the handmade puppets) with a picture of a fly on the reference wall in the background.

There are a crop of cottage-sized dandies growing on Rana's roof as well. Where else will she be able to grab a hank of roots to throw in the soup pot?
Posted by Shelley Noble at 1:38 AM 5 comments:

I felt this spider puppet was a tailor. I knew I wanted the webs in 1/2L to be lace and fancier than our world's webs. I knew I wanted him in the attic space so that the window's twig mullions would cast a full web shape on the light fabric in the moonlight.

But how to show him making the Halfland lace?

It was so fun and easy. Much easier than I thought. I stacked and glued wood blocks to a small base that can be hot-glued down onto the attic floor like an independent set module. Covered the stack with a greatly textured woven fabric from a Mood remnant. First sewed a few corners of a cut up stretchy lace knee-hi down to that fabric to be the lace piece he will be making currently. And then glued down small iron tacks over those pull spots so it looks as though the tacks are holding the threads for him.

I invented micro lace-making spools and other props for him, like the dark wooden bowl of woven lace above, and a few larger lace-making tools to sit along side his set to make him appear even smaller.

When I showed the finished sub-set piece off to Cirelle last week, she was irked because she knows that all spiders we see in a web are female (!) and this fellow is truly a male. But I made her feel better by saying that in 1/2L the male spiders that make the lace are "fabulous" and talented. But then I explained for real that it's just a matter of my needing another male character around Rana as most of the main characters in the series are female. It was too weighted toward that gender for me.

When you make a world you can make up a reality however you like!
Posted by Shelley Noble at 3:24 AM 5 comments:

One of the tasks I handled recently was something I had forgotten needed doing. Years back, I had attached all the Answer Tree's leaves with hot-glue but thought I'd get a brave volunteer to use flexible cement to hide the shiny glue and quickly sculpt more natural looking transition from branches to the stems.

After the set had been moved and fortified (!) I found it very easy to climb up there myself and swab on a mixture of paints to get the tree's taupe over the cement that had been made originally.

But as I got into it--literally-- I found that nearly every leaf stem had not been sculpted yet. So I zoned out and went to work on each stem all around the tree, from tip top to bottom.

Next I'll need to hit the new white stems with more taupe paint wash, which is thankfully very fast and forgiving work.

This job may not have mattered for long shots of the set. Heck, I hadn't even noticed it was undone. But it really is important that it be done for the close ups it'll be in behind Yanu, the moth man in the tree and other tree up-shot action. 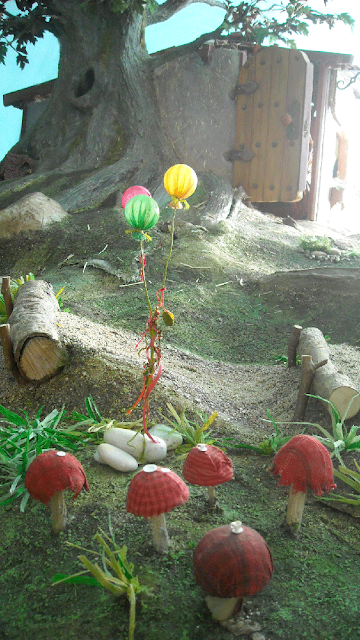 Here you see the taller cluster of cheerful micro-scale balloons on set during the daytime, which may announce where the party will take place that night. Yo. (You may also notice that all the walls on the cottage are now white-washed and textured with chopped straw.)

These balloons were much more tricky to make than I imagined. I made many many attempts at it, shopping the aisles of craft shops for candidates that didn't work.

I needed them to be the right size, round, transparent, lightweight, and to have a handmade look. Miniature glass Christmas ornaments worked (used two of them out of the five) with the exception of their glass openings being more broad than I'd prefer. I camo'd that with twine and cloth skirts as much as I could.

The other three were made from a child's toy packaging that I bought for a dollar. Gave the toys (to a happy Aedon) and glued the two haves of the bubble they came in together. I had to layer them with clear glue to level out the toy's name on both halves and the seam in the middle. The seam was further camo'd with hand-painted stripes.

After the clear balls were wrapped and glued with hand-painted shiny silk-cellophane fabric, they were attached to painted strong wire that was then wrapped around clusters of rocks that can be hot-glued to the party set. The balloon strings were festooned with tiny ribbons and flowers to make them more party-like/festive as well as to hide the joins of the wire strands.

I like these as the last element for the party decorations because they add a nice height to the set for the flying bugs to be seen with.

I made an additional one, a nice new shiny red one wrapped around the middle of one of the worms who will be arriving with only his stomach kept aloft from it as he inches along.
Posted by Shelley Noble at 2:46 AM 3 comments:

You're Invited to the Big {small} Party

Delighted to report that the Bug Party Decorations are Completely Completed. Above is a quick set up just to give the idea of how the party setting looks at night all lit up.

There has been a ton of great changes to the set in the last 2 weeks. One development from the activity was the the foreground set piece is now used elsewhere and the picket fence will now run here and there along the edge of the main landscape. I was delighted by the unexpected effect this change had on the Bug Party setting. As soon as I put the larger scale fence closer to the smaller bug set, it somehow made the bug set look as diminutive as it should!

I'm using this principle in other spots in the film as well...

Next up: Balloons!
Posted by Shelley Noble at 2:09 AM 8 comments:

Look at dat One>

Chandelier with six lighted candles finished and more importantly, affixed and installed inside the cottage. Now that the cottage roof is ohsoclose to being actually completely complete, I was able to attached the twig chandelier with wire on an eye hoof on the underside of the cuppola. I then smashed a lot of wood epoxy over the wire to prevent it from having any swing whatsoever. This will be covered with gathered silk to look like a Victorian ruched covering at the top.

I plan to use an add'l amber LED hidden in the middle to cast a warm glow on the ceiling (seen on bottom right). Each candle stick is fitted over slim balloon battery op'd LEDs with small handcrafted flames made from thread, florescent paint, and mica for sparkle.

During the interior night Act*, this light, the embers in the hearth, several other lamps, candle sticks, and mirrored sconces will add plenty of cozy warmth to the scenes.

Halfland will be divided into four Acts; Dawn, Day, Dusk, and Dark. The series ends with a bonus Scene in the dessert at Sundown.
Posted by Shelley Noble at 1:37 AM 2 comments: