Love in the Desert

This week on Open Studio Fridays I had the blessing of Sherie from the Sea showing up to work on the desert set after an absence of several weeks. She heads up some key events during the holidays and has been booked elsewhere since Thanksgiving.

It was such a delight to see her here again. The evening took off even further with the arrival of her beau, multi-talented photographer and my friend, David Sand. I call Sherie "David Bait" and if Sherie comes here to work I sometimes get the pleasure of his appearing too.

This time was extra mega enhanced as he brought his most beautiful guitar to play next to her while she worked. He played, some of his songs, some of others, we all sang a bit, and laughed a lot. One of the sweetest things was to hear Sherie and David sing a wonderful song of David's about a fisherman. Heart Melter.

That would have been enough, except Sherie and I made great progress on the desert set design as well. She and I finally discovered how to make the "prayer flags" that adorn the sage's tent. We took apart embossed paper flowers and re-fashioned them into four-petal blossoms with frayed thread centers and attached them to wire-filled vine over the bunting.

She also added some natural palm curly fiber to her hand-made palm tree for the scene that I had found under a real palm tree while out earlier that day. The fiber looks a bit like Sherie's locks and finishes off the tree to absolute perfection.

Enjoy a moment from David's serenade to his Lady Love while I take photos of how Halflandian magical the desert set looks to post very soon...
Posted by Shelley Noble at 1:28 AM 6 comments:

This is what had to be vacuumed up. A few weeks back, while finishing the outer walls of the cottage and filling in the gaps of space between where the walls end and the roof sets, I went wild with straw.

I used matte medium on the walls and pressed small pieces of hay into the surfaces for a wattle and daub look. Then I used gobs of flexible cement on the tops of all the walls and sills cramming clumps of hay into it to make it look like straw had been shoved into all the open drafts in the house, as you do.

I was hugely surprised at how much "life" having the straw strewn on the cottage floor and landscape gave. It was as if someone actually lived there for the first time. It was a great lesson. If a set is too clean/pristine it is in danger of being a doll house. Give it some grit. Glue down some hay, put stuff into corners. Life is messy.

Funny note: At the same time I was doing this to the cottage I got a fantastic job with the wonderful publisher... Hay House! Best jobs I've ever had.

The Tail of Inger and the Little Devil Moth

A new Halfland creature has appeared this week in the macro garden. Made by a new guest, Inger. 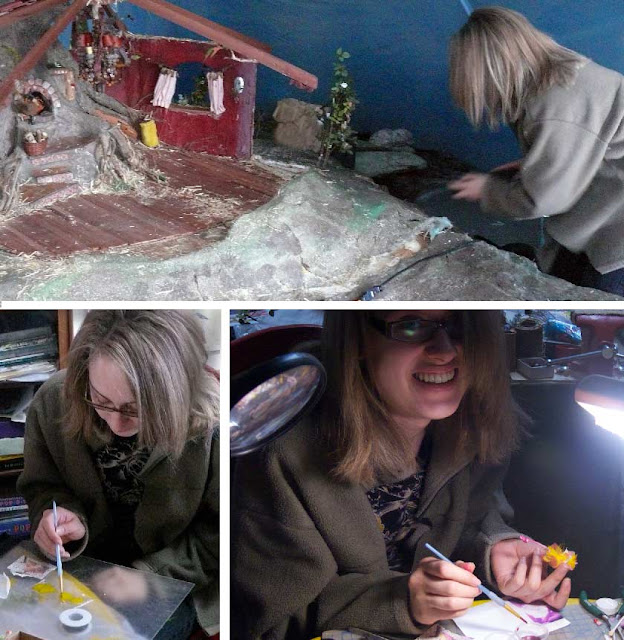 Dear friend and niece to another Halfland soldier, Mandy (seen below helping here early last year) is in town briefly from another state and kindly offered to spend the day helping on set (aka; a new sucker volunteer). The first task was to help me disassemble the cottage components in order to give a good vacuum to all the excess hay that had been applied. I need to get things organized and ready to construct the porch next Friday.

After watching her work, I felt guilty for inviting her over to slave. So, I thought I'd offer her the chance to create something that appealed to her for the film. I gave her the tour of the workshop and its reference images in case something made her raise an eyebrow of interest. Like a fish getting snagged on a hook, something did make her say "Ooo." It was a little, brightly-colored, fuzzy moth in hot pinks and sunny yellow. We set to work....

I threw her the bag of wing silk and she cut out the wing part shapes and stuck them onto a piece of clear tape to hold in place while she painted them with silk inks. The watercolor like effect of wet on wet was sensational. I think I'll make all the butterfly wings in this way.

As we were hunting around the materials for what to make into the moth's pink conical antennae, seen in the reference picture, we hit upon the idea of using the tips of white seashells. We were delighted to find that my new precision metal saw, bought to cut down armature hardware, took care of the shells just great. It cut them without shattering. She daubed on matte medium and pink dye before gluing them into the feather fluff head.

As Inger was assembling the new puppet, she commented that the antennae reminded her of little devil horns, which of course they do look like! Hers was a perfectly Halflandian observation! We both agreed the moth needed a matching devil's tail to slip into view from underneath his wings. She used silk covered wire painted pink and sculpted the tip from fluffy air dry clay and painted it to match.

The next morning after she left, I added another puff of fuzz made out of soft, yellow feathers to cover where his front leg wires were added and to match the image's hairstyle. 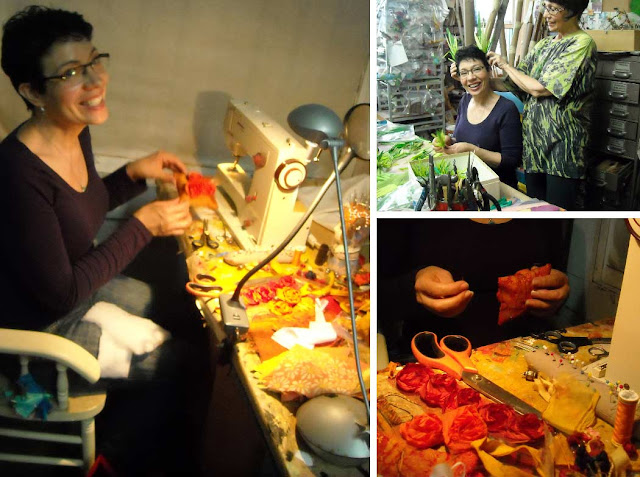 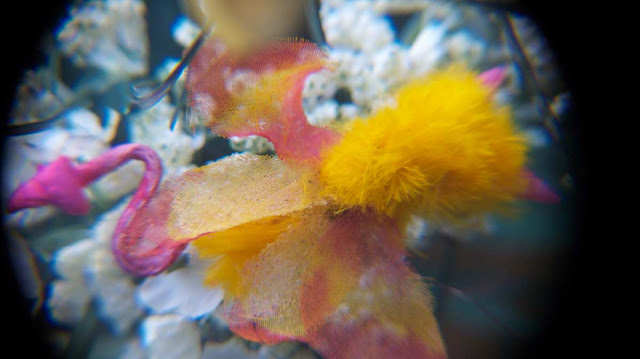 A distortion macro view of the little devil moth. It's a completely charming addition to the film, Inger. Thank you for spending some of your trip here and I hope you'll find your way here again someday.... 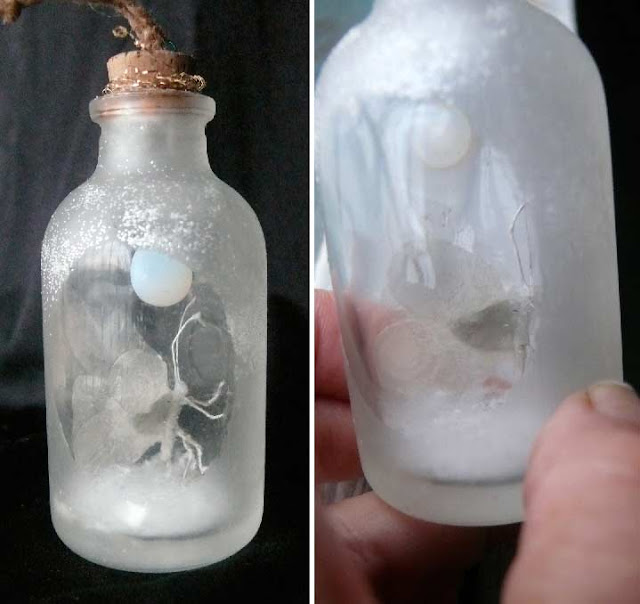 Art Bonus: Just before Christmas I met a wonderful artist nearby who inspired me very much. I wanted to make her a little something so I took an extra whimsey bottle and fashioned a scene of a cabbage moth dancing in the clouds near the moon inside. I really love the tiny theater effect of a poetic tableau like this. And how the glass distorts the scene inside into a dream-like view.
Posted by Shelley Noble at 6:08 PM 3 comments: