Trying to find out why on earth the earth moves during these tests. Mike kindly pointed out the unintentional shimmy.

This test is using the tripod head on smoothmover clamped to a piece of 1/2" plywood sitting on a crate on a sawhorse table next to the set sitting in a plastic tub.

(Previous test was the same only using a single tube articulated arm superclamped to a metal tray on the crate.)

Christine, who helped me finish prepping the set for this new test, and I figured the bounce of the arm was longer than the set's from the flexible floor moving. But now I'm thinking it's the set needing to be more secure, more firmly attached in place.

(It was also Christine's ingenious idea to create that green fuzzy painted faux fur cloth tacked at the back of the scene to fill in any gaps in any set up. She should patent that.)
Posted by Shelley Noble at 4:54 PM 5 comments:


Frog Test Editlo - Computer from Shelley Noble on Vimeo. (fyi; right clicking on the play button and selecting "turn loop ON" will playback on auto repeat.)

This is a very big deal here, gang. For the very first time, The real production filming has begun in Halfland last weekend. Here, a very brief 60 frame test, shows the Finished Time Frog puppet moving for the first time, the first life in 1/2L. Did I say this was a big deal?

It's taken 20 years to get from when I thought of this film to the point now where all the sets and props are fully built, aka pre-production, is done and that the choice of method for filming has been made and equipment kindly loaned or aquired within our means. The project has now moved into PRODUCTION.

And now, thanks to many of your long standing encouragement and help, the actual shooting has begun. I sent up the official Bat Signal to 1/2L Hero, Dick Kaneshiro last Saturday and even though he had just finished a long week of very long days at his pro animation gig, he went to all the trouble to bring over equipment he hasn't needed to let me try it out to see whether it worked for what I wanted. It does!

By the time Christine! Kuper came to help out on Tuesday, we were able to set things up enough (thanks to her brains) to actual forge into frame-by-framing together to make this little test.

Since then, I've been searching out ways I could get a bit of atmosphere and texture into the straight capture to get a bit more of a storybook magical visual style with software I already own. Mike Brent once again and ever helpful, suggested I try a little manual batch processing to see if that would get me closer. Later versions of Adobe software will do this kind of adjustment layer effects more easily as will other Adobe video editing applications but I don't have those right now and want to see what can be done with what I have.

What you see above is the result of my hand placing a texture layer over and hand-blurring around the focal point of each frame. This isn't how I'll be making the entire film, just a test to see if what I had in mind could get anywhere close. I didn't pay too much attention to the precise placement of the texture layer over the base image and as a result it shimmies a bit like antique nickelodeon celluloid, which is kind of interesting and may have a place in the effects here and there.

Rule #44: Nothing is ever completely complete. Even when it seems like something is fully done, there will still likely be revisions and adjustments to be made once the Latex hits the Papier Maché, as it were. 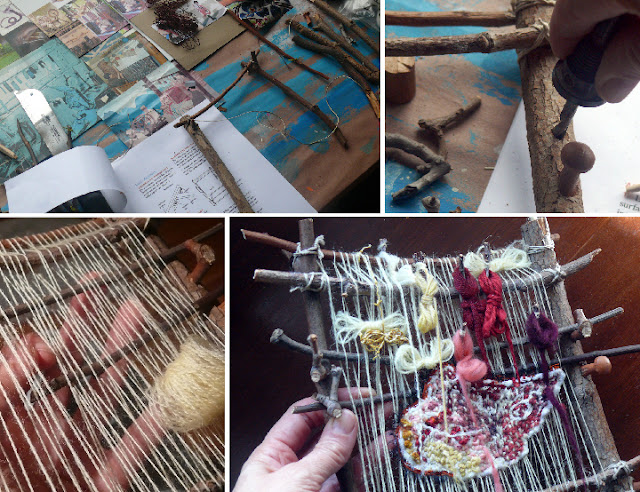 Built while still recovering, one of the final props for the main set. This, for the porch next to the wisteria vine chair, a rustic tapestry-style loom sits in the sun. Rana, the film's main character, weaves butterfly wings as her art. Art within art. My art makes her own art. 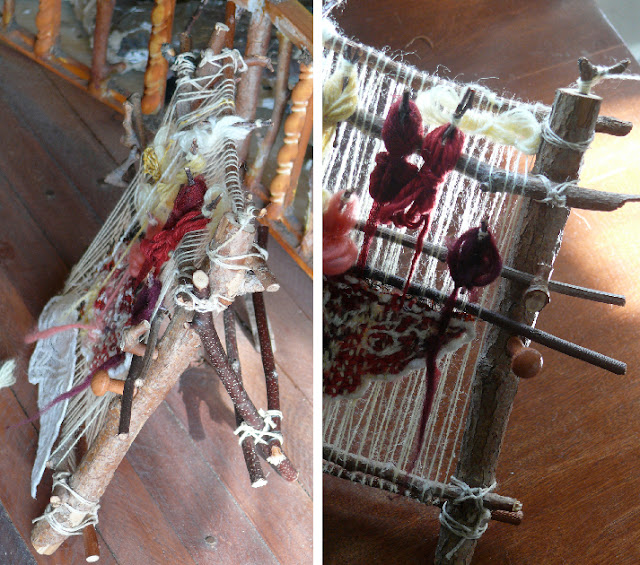 A friend donated an old blouse to the project--no, she meant for me to wear it--but I cut it up into several sort of lace butterflies to use as the weft for the tapestry style 1/2L butterflies. One, half-done on the loom Rana keeps on her front porch (seen being made top images) and standing on her porch in the middle. The little one, finished in wool yarns with roving body and wool blanket yarn antenna, shown on the bottom will be featured in one of the opening title sequences for the series.
Posted by Shelley Noble at 7:58 AM 7 comments: 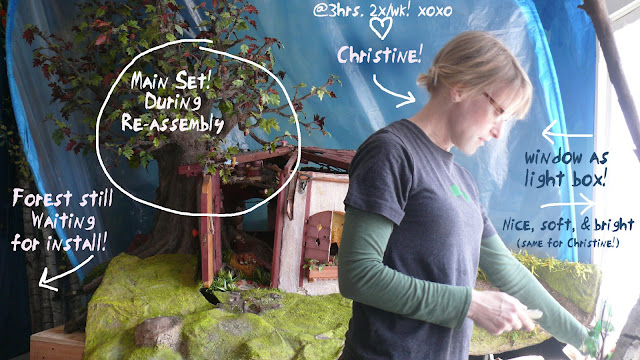 The plastic scrim bottom isn't made taut yet and the birch forest isn't yet on their bases in position, but I wanted to show how lovely the natural light photographs on the foreground now that the room's windows are wrapped in white plastic table cloth material as a lightbox. 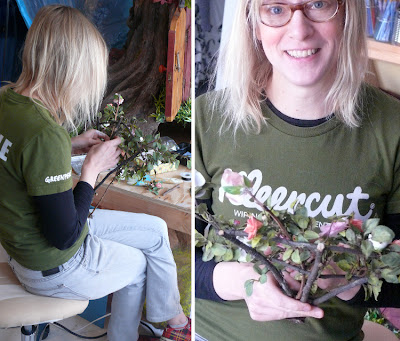 A shot just to remind Christine's East Coast mum how cute she is.

Christine! and I have been knocking down many many small, misc. tasks to get the main set fully re-assembled and ready to start shooting. A special guest is scheduled for Saturday and it is a good motivation to push for finishing up loose ends. Kind of like when someone comes over for dinner and all the little things get picked up and put away.
Posted by Shelley Noble at 10:32 PM No comments: 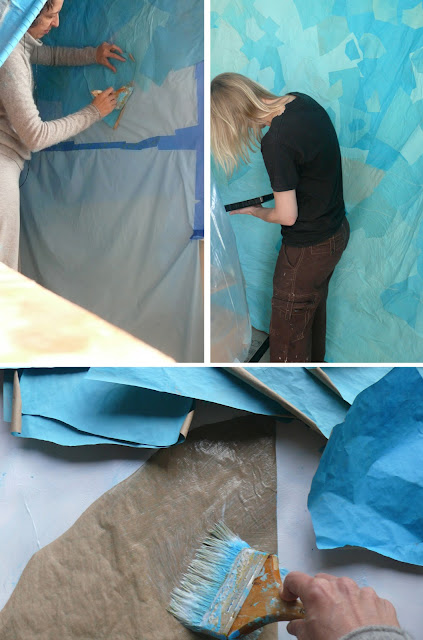 Christine! and I pushed on and completed papering the entire 12' new sky backdrop. We painted dozens of large pieces of brown paper with shades of blue from the black-blue of Night to the pale-cerulean of Dawn.

We cut the dried pieces of blue into irregular shapes and slathered their backs with ample matte medium. This was used like wallpaper paste, and pressed into the collage of graduated shades while wet and brushed down flat against the wall behind. 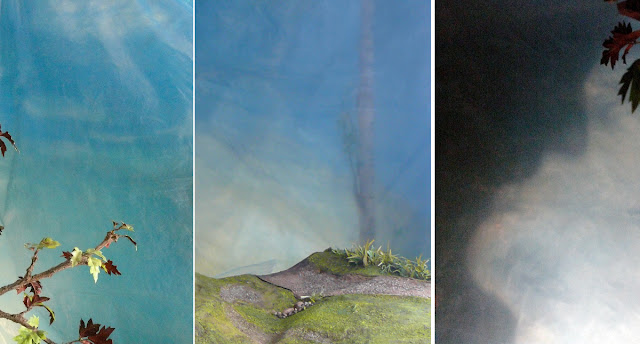 Here are some test shots of what the finished sky backdrop looks like behind the plastic scrim layer. Dreamy and hand-painted looking. No harsh corners.
Posted by Shelley Noble at 10:23 PM 1 comment: 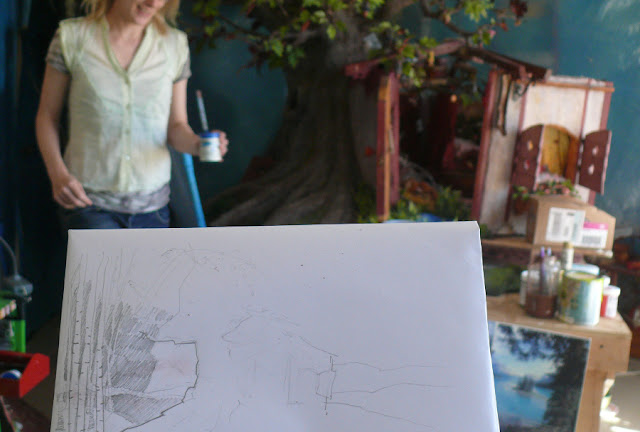 Like a miracle, Christine!, a fine art painter, has come along to hand-paint distant hills and a continuation of the birch forest on Halfland's backdrop. Above, her sketch of the main set she drew to plot out the shapes and proportions. Amazing.

Once the backdrop was fully papered, Christine put down the hill shapes all across the horizon at the right height for puppet-eye level on the main set. The two shots in the middle show her painting in the juncture of where Day meets Night, and then how the finished area looks behind the plastic "air" screen. On the right, her lovely Summer birch trees. 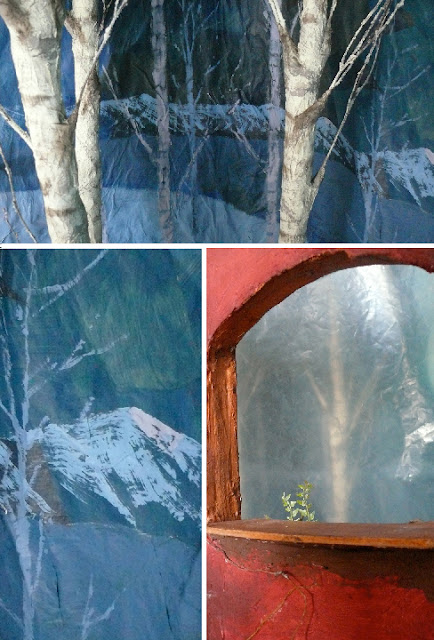 At the opposite end of the sky, to the left of the cottage in the wintry night, Christine made the same landscape as seen in a cold, moonlit darkness.
Posted by Shelley Noble at 10:04 PM 1 comment: