Here's where I've been. 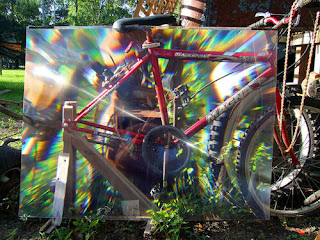 10-step, hand-polished, clear center, Fresnel lens
purchased from Green Power Science in Florida for $75.
Can you imagine how I'm using it to film Halfland?
Creation timeline has taken me far longer than I could have ever begun to imagine. The good news from that is that I've grown as a person, much clearer on what I'm making with Halfland and why.
And, after all that has transpired since the last post, I am more capable to carry out filming the film series on my own terms. Rules have been thrown aside with the courage of new conviction to get it done, without doing it as others would.
The regretful news from it taking me decades to get to this point is that the people who got excited and were so supportive on this blog have, for all intents and purposes, been let down in not seeing things realized sooner.
The only way out of the latter result will be to make the film. The length of time it's taken me still will have tried human patience beyond its limits. But will, in the end, be fully repaired if I can succeed.
I remain gratefully in Halfland.
Please stay tuned. And Thank You.
Posted by Shelley Noble at 1:48 PM No comments: