Halfland is Once Again Whole 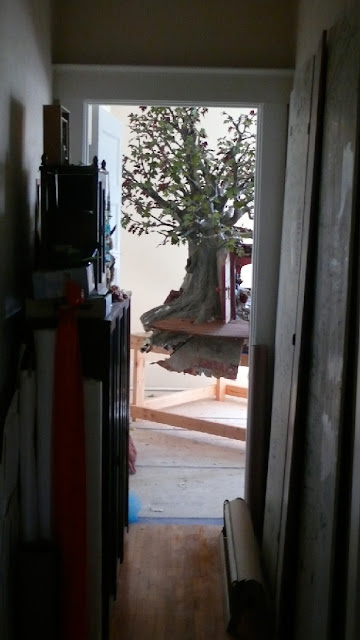 It took all the King's Horses and all of his Men to get Halfland whole once again, my friends, but it is.

I'm back from the netherworld of illness and back at exciting work on the project, more thrilled than ever.

More photos of how the tree was cut apart for transport and how it was reassembled by a Halfland Hero. And the scoop on how another Halfland Hero came just before I got sick and build two set stages to fit the space. And how yet another completely new Halfland Hero has just shown up from the ethers to help and learn.

I am very clear now that everything is better when there is another person with you. 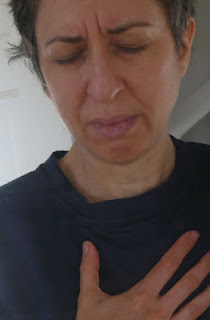 A lot has happened. Not much has happened. The cold winter, the too large a move, a cold, all conspired to lay me out lower than even I could have ever imagined. By the time we were in the new place, I could not, no matter how much my life depended on it, climb a flight of stairs.

Then came the flu and fever for two weeks, rough Photo above taken during that after I'd just taken scissors to all my hair. Then came the severe allergic reaction to the antibiotics I was hoping would help resolve the flu. Photo below taken of the all over painful hives, the swollen joints all over, and my lips still swollen even after a couple hours after being treated with an antihistamine injection.

Then I was told I'd formed pneumonia in my lungs and that I would have to have more antibiotics. My legs became very weird feeling I could barely walk so I asked to be admitted to a hospital so they could supervise the new drugs and be there if things got worse. It was very stressful not knowing if I should get to the ER 40 minutes away at any hour of the day or night, not knowing if the next reaction would be more serious.

I checked in, Paul was away, a friend, Mandy, kindly came and stayed with me there and at home over 4 nights. An unbelievable comfort. The new medicine they tried to give me through an IV was stopped at once when my arm started mapping out in red as it entered my veins. More waiting. Then another drug tried by mouth was tolerable but I was on pins and needles stressing over what could happen next. Finally one doctor said that the stress was worse than the pneumonia at that point. And that if I stayed overnight and if the lungs were heading in the right direction in the morning I could go home and overcome the pneumonia without taking anything further. Yes, it would take perhaps a month, but it could be done. I jumped at that idea with both feet.

And here I've been since. Watching many many dvd's on the couch, living on soup, salad, and avocados, doing my best to keep hydrated a constant focus. Raw coconut water each morning is probably why I'm still here.

I should not push anymore. I need to learn to not make everything else, like moving my house, more important than my body. It wasn't ever an issue I'd noticed before. Yeah, I'd get exhausted, beyond comprehension tired before. But I'd be fit by the morning. Not now. Not yet.

I don't want to test that line any more. I want to work with my health so that it always comes FIRST from now on. This is serious.

No one is more surprised than me that I am as passionate and into making Halfland as I ever have been. I hunger to have these hands make the things that are next to build. A dear friend suggested I first make a trailer, hinting at little scenes to get my feet wet with the filming. I think that is a brilliant idea. Perfect.

The set, my desk/office, the craft table, and the workshop supplies and work station are all now shoehorned into a standard bedroom in a nice apartment. Like a Chinese puzzle, I have to move boxes to get to other boxes still. However, I am taking deep breaths and making it ok to go slowly and mindful foremost of my energy levels. If tired, I do practically nothing.

I'm not kicking up my heels exactly yet, but so far things are going better than they were. For sure.

Gently floating my way back.
Posted by Shelley Noble at 9:06 PM 10 comments: