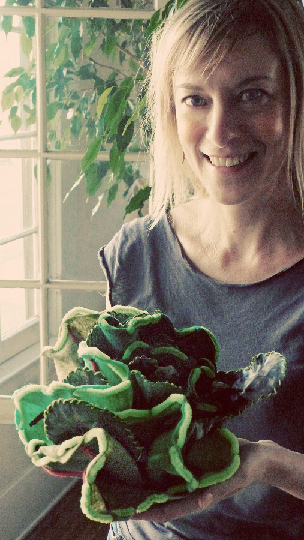 The lovely Christine Kuper presenting me with her wonderful lettuce coral puppet from Halfland's underwater scene on the first day I met her.

I can't wait another minute to tell you all about Christine! (that's how I always mark her name in my calendar) It started with an email from her after she found me in LA from the NYTimes article web archive. (Proving that sometimes miraculous gifts can arrive via everyday means.) She tells me she's seen the invite on this site about making fish puppets for the underwater scene and she's made one, and could she drop it by in person? (!)

Christine, an accomplished fine artist, new to LA, working on the web, was interested in getting her hands into making in 3D as a welcome change of pace. She had been exploring stop motion as a possible expansion for her personal art of painting and sculpture. She'd read Ken Priebes book on the subject and was familiar with the players and the process in general terms.

In walked the most charming, funny, honest, and needlessly humble women I've met. She is scaldingly smart and yet entirely comfortable to be with. A delight in every delicate way.

After having her over several times, whenever she can arrange a few hours, I have morphed from leading our tasks like a cruise director to asking her how we should approach it. After seeing her work for Halfland, I feel as though I could hand over any part of the production to her and she'd do the job likely better than myself. What a relief.

There are just a few characters and props yet to build for the entire series. Most of these outstanding projects have all the materials to complete them collected and organized in neat trays ready to take on. Outrageously fun, plum, little tasks, highly satisfying to build, and I'm giving them one by one to Christine as she's able to take them on. She's currently working on the Queen Bee puppet at home!

Truth be told, I've been angling (ha) for she and her husband the uber-multi-talented, performer/writer/actor/singer/songwriter/musician/gardener/sweetheart Manoel Felciano [MA-no-EL Fell-see-ah-no], to actually take on the underwater scene as their own personal experimental short within the Halfland film. With them working on it, there's a chance all the wonderful puppets can come to life finally.

They are considering it.

Meanwhile, Christine! has been coming over to help me get the new sky up in the new set space while I've been recovering and regaining my strength. It's been very difficult to resolve. We tried very hard to create a totally free-standing sky structure but it proved too difficult for me physically to withstand constructing. The compromise was to use small screws to affix the scrim layers to the ceiling and walls with as minimal intrusion as possible. These small holes can be easily patched when the set is removed.

It's just so big to construct in this space, even though it's a third the size of the previous sky, and it's trying to fit into a trapizodal-angled corner shape which is awkward under best of circumstances. But even given the many challenges of it, we are getting it done. I couldn't be doing it at all without Christine. 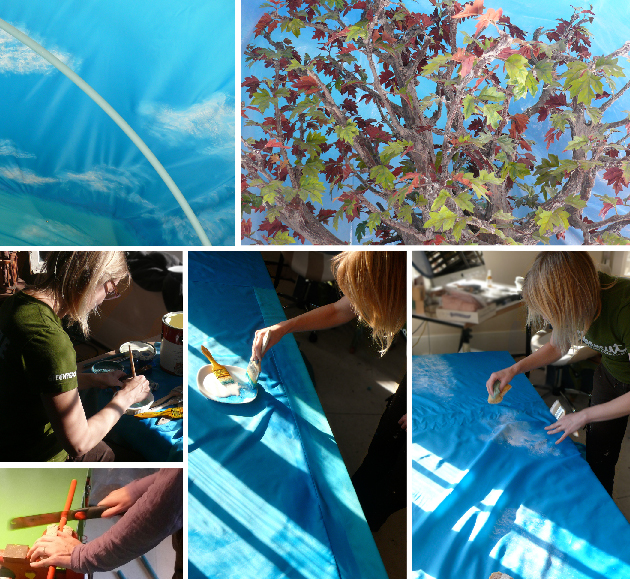 I stitched three colors of cheap suit lining in blue 15' lengths ($2/yd) because it's what I had on hand, and Christine! s k i l l fully mixed exact matching colors of acrylic for the three shades and used them to blend out the seams for a softer shift from one color to the next.

Then she and I painted feathery white clouds over the entire backdrop. We attached it to the corner with as gentle a slope as could be to avoid as much shadowing as possible. With the transparent scrim layer in front of it (upper right) it gives a convincing illusion of soft atmosphere.

Scenes from various stages of the sky layers going up. This is part one of the saga, will update as soon as progress continues. 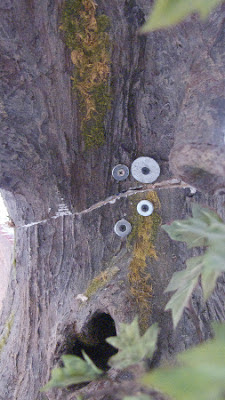 Not to be outdone, Mano came along with Christine one Saturday to check out Halfland for himself. He very kindly allowed himself to be put to work. And promptly put me to shame with better ideas than I had. Above you see some of the screws and washers used to assemble the three parts of the tree into one. I was going to map precisely where these screwheads lay before patching over them so that when the tree next needs to come down they could be located easily. I was going to use clear sealing tape to make a kind of clear corset around the trunk and mark where the screws were with black marker. 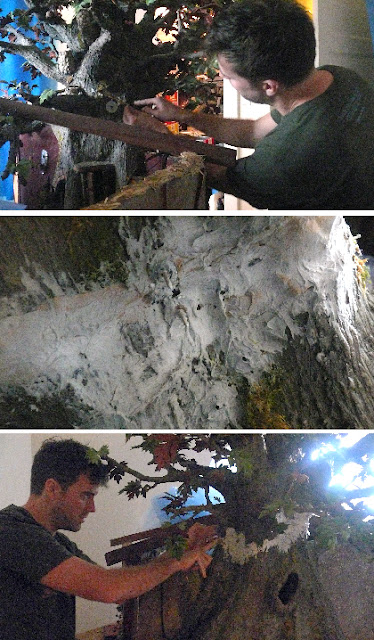 Manoel, using his sharper mind, suggested that toothpicks be used to mark their location during the cement patching, and removing them after the painting and repairs have been completed. This way there would be no distortion of a map trying to fit over the new depth of repair work, and the only trace would be a few very small holes in the finished tree. Completely brilliant.

Thank you both for coming. It's been unbelievable having your involvement. I welcome as much help on the project as you can possibly give. You make Halfland better.
Posted by Shelley Noble at 12:17 AM 1 comment: