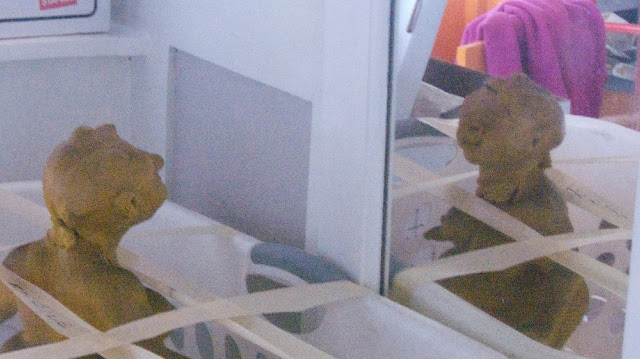 The soft clay sculpture for the main character, Rana reflecting on the recent relocation.

Yuji (aka moco engineer/animator Dick Kaneshiro) is here helping me build an animation stage for the Halfland sets, bless him. Photos of the insane situation he walked into and hopefully the gleaming results shortly.

The sky that took me two months by myself to construct is gone. Long live what I gleaned from making it and plan to make here. Far simpler, yet as layered/depth illusional.

Rana's nose smush. She'll be ok once I touch it up after I smashed it when placing back on the baker's rack used to hold the sculpts.

My inkjet printer. It survived the move fine. It didn't survive my putting it on end fully loaded with about $60 worth of fresh cartridges however. There wasn't any room to put anything and it got put on end for a while. Now I know they need to me kept flat. Seems obvious to me now. But things were crazy-ier couple weeks back.

The little iron balcony on the tiny mouse house was lost in the move, not glued on strongly enough I suspect. But the entire tiny garden with every miniscule tomato on its vine and every grain of sand seed on the split squash survived intact. Amazingly.

And I took photos of Yuji here Monday with the Lytro, put it down not in it's little box and now its AWOL.

Nothing else has been broken or lost thankfully. I plan to gut most of the 10 papier maché landscape pieces that got cut up and moved in. Just saving the scene settings on them and layering them like dirt cloths on the stage for shooting.

The other place was for Building the Sets. This place is for Filming the Animation. GOGOGO!
Posted by Shelley Noble at 12:04 PM 10 comments: 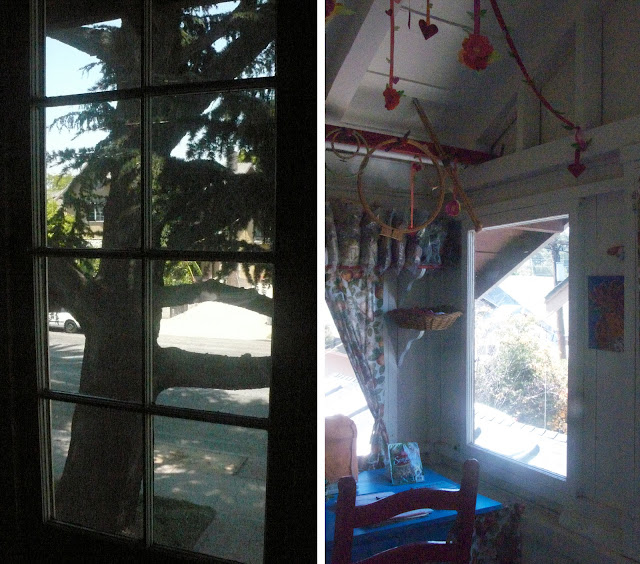 More of the story to come... but I'm completely amazed at how Halfland-esque our new home is, even right down to the wonderful beautiful large tree we could reach out and touch.
Posted by Shelley Noble at 10:40 PM 15 comments: