My Answer for Filming Halfland 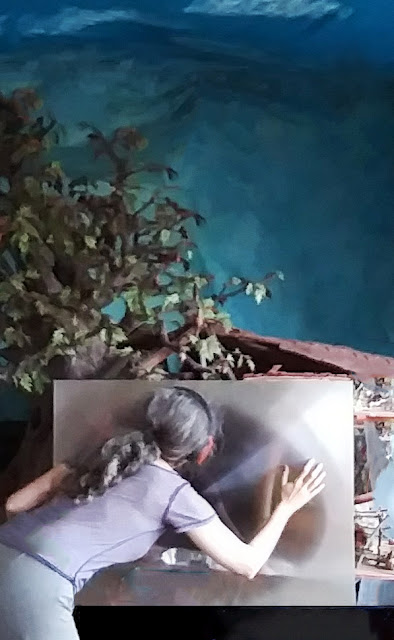 I had hoped this would be The Answer for filming Halfland.

I hesitated to open the package from Dan and Denise Rojas* at Green Power Science. I had seen several of their videos and watched Dan expertly hand-polish second-hand fresnel** lenses in numerous stages using expensive equipment. He made what he calls "Clear Spot" lenses that are left as grungey and patinaed as they were found in salvage yards, taken out of old big-screen TVs, except for a large well-cleaned and polished center. But today I finally took the plunge and opened the package to look at it and confirm or dispel my thoughts on how this would work.
It 1,000% gives the effects I was dreaming of for Halfland. All of the analog distortions, the natural vignette at the edges, the hyper-shallow depth of field, large enough size to cover composing the scenes, the ability to shape the blur and stretch of everything in front of it, all fully checking the boxes. I could weep with joy at having it. I am beyond excited to begin shooting what is in my mind.
I had flirted towards this reality for many years, fumbling, reaching toward this very thing without any idea it existed. I loved the way the highly detailed puppets and sets looked when seen through large glass jars of water. I felt like a super genius reverse-engineering what my greatest artistic inspiration Dare Wright had done in my favorite work of hers, Lona.
But stop motion is something else again and all of the effects I wanted for this film were natural and dream-like. No edge-to-edge clarity and bright lighting.
I next need to jerry-rig/build a frame to hold it steady and in position for every shot. It is soft like regular PVC, capable of making gentle convex curves. The stand for this application may be as simple as a wooden cube with clamps that allow the angle and curves at the four corners to be adjusted as I go.
Get excited.

* Dan and Denise make solar Fresnel Lenses, Parabolic Mirrors, and other intriguing things all towards their passion for alternative energy options.

** A fresnel lens is composite compact lens originally developed by French physicist Augustin-Jean Fresnel (1788–1827) for lighthouses.[1][2] It has been called "the invention that saved a million ships."[3]

The design allows the construction of lenses of large aperture and short focal length without the mass and volume of material that would be required by a lens of conventional design. A Fresnel lens can be made much thinner than a comparable conventional lens, in some cases taking the form of a flat sheet.