UPDATE: THANKS TO EVERYONE WHO CONTRIBUTED TO JOHN'S FUNDRAISING, LOOKS LIKE HE'S MADE HIS GOAL! Thanks to all! The film promises to be fantastic and I hope John will let us know if he needs anything further to git-'er dun. GO JOHN!

In addition to creating, writing for, editing, and publishing Stop Motion Magazine, John Ikuma has begun directing and producing a documentary all about the rolicking stop motion vibe happening in Los Angeles right now. There are so many fantastic projects underway and John has taken it upon himself to document as many as possible to share with the world.

He's interviewing many people you know and love {like. cough. me.} and might like to see more of. He's got $1,530 already raised for his $2,000 goal to fund the film. There's just 30 hours left in the campaign. Are you interested in donating too? Viva la Arts! Hop to it!

John thanks you I'm sure! (nicest guy in LA)
Posted by Shelley Noble at 5:43 PM 5 comments:

Talking to my dear friends, Darkstrider and Yaz via email, across the country and across the globe. I wanted them to see a dilemma I'm wrestling with regarding the set. Shot a few shots of the backside of the set (that which is not-ready-for-publication) to kind of give them a feel for what it would be like if they visited here in person.

I'm hoping they'll tell me what to do because this sort of thing is not my area. I decided to make it a post instead, to let all the ugly hang out for all to see. If I don't show all the challenges with the project as well as the triumphs then what good is it?

I'm not after making the set "properly built" or even remotely professional. What it lacks in construction will be more than made up for by the overall effect of the film by the time it's done. Creative shot set ups due to set limitations, erasing major uglies in post, etc.

So, thank you for taking a look and telling me what you'd do... (hopefully type/notes are large enough to read when clicked on?) 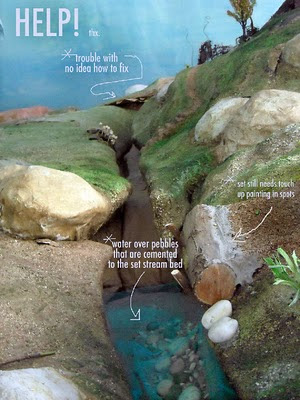 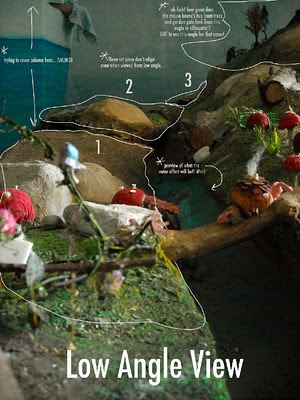 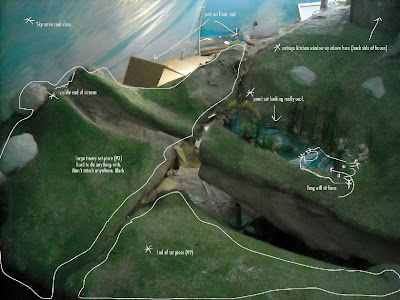 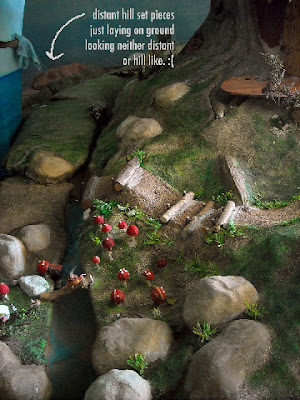 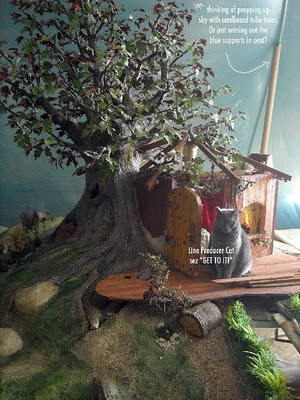 Wednesday was KIT KRAFT DAY, people! you know, the one day a year I'm in the area for another reason and can actually get myself to Kit Kraftapolooza in person! Sure their website is easy to navigate and their order processing is the fastest in the business, but nothing beats spending 3 hours there, poking in every single corner, checking out the new products, picking up essentials, finding creative inspiration. 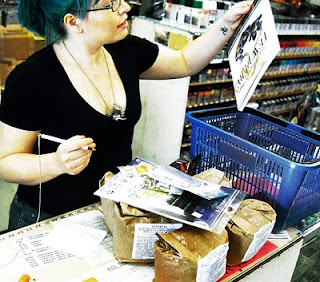 Their sales people are sincerely cheerful and utterly non-pushy. Here the fabulous Sarah rings up my order (booty). It was a lot (I opted to grab 25 lbs of Ultracal to start to make the puppets in earnest) but Mike was great as usual and made it easy for me. With all the fun bits I bought, all I could say when I got the total was that that is a LOT of fun for that money.

Owner Mike Sitkin once again kindly shipped my Christmas card collaboration package down to Mark Fullerton. Why I always happen to have that vital and timely holiday package in my hand on Kit Kraft Day I'll never know. But Mike uses his Super Shipping Chute to get Mark the Xmas materials super fast. I just subscribed to their new bad ass blog too. 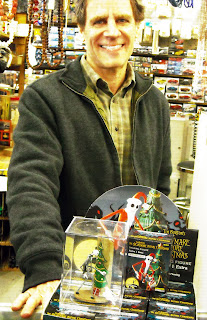 Check out the very cool Nightmare Before Christmas Trading Figures and Scenes he's got. They looked really neat and the price was good too. Great to grab if you're a collector.

Thanks, Mike and crew, Hope to see you next trip!
Posted by Shelley Noble at 6:11 PM 7 comments: 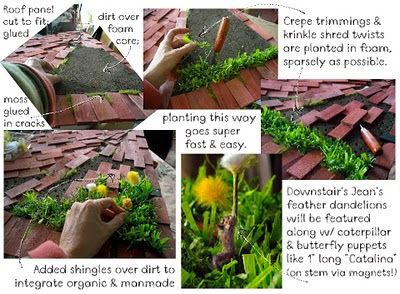 Cirelle and I collaborated on a way to integrate grass into the cottage roof on the low side that nearly blends into the hillside, which will have matching grass planted on it. She and I got as far as cutting fitted foam core to fit the gaps left in the shingled panel and covering it with paint and a layer of dirt.

I took it from there the next day and discovered several cool 1/2L. ideas in the process. That's often the magical gift of Cirelle and the other wonderful workers that come over to contribute, they resolve a solution with me and then I'm free and clear to simply create. They get me over any inertia and confusion and keep the project moving, inch by inch.

I've given the team the holidays off and plan to resume, with my strength restored, in January. Until then I'm on my own in Halfland, wanting to go 50 directions at once with a terrible yearning.


Mark Fullerton and I are collaborating and making Xmas 2010 in the meanwhile. Woot.
Posted by Shelley Noble at 5:11 PM 8 comments: 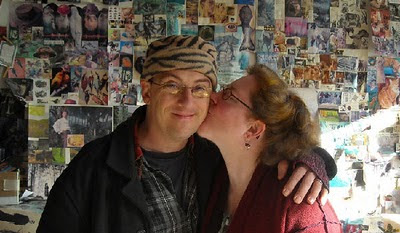 Had the special treat of a rare visit from Portlanders Sven Bonnichsen and Gretchen Lair of Scarlet Star Studios. Passionate animator friends and supporters of art and artists. I've known them both for years online, had met Sven once before in 2007, but never had the delight before of getting to fleshy-see the darling Gretchen.

They were at the tail end of an epic Stop Motion tour through LA stop motion houses during the holidays and stopped overnight in Halfland before heading back up for home.

Two nicer and sweeter people you'll never meet. They both find magic everywhere they go. If they found themselves in Hell they'd admire the pretty colors the flames were reflecting against the hell cave. They're thoroughly charming! (As it was we nearly froze them out here during the night in this big drafty heatless loft. We gave them every blanket in the house, a hot water bottle, an electric bed pad and the poor dears shivered trying to stay warm using a paltry heating pad. But other than that they had a marvelous time with us! brrrr.) Being Gretchsven, they made the most of it. I'm so glad I got a chance to sit and visit and get to know them both a wee bit better than the internet will allow. Sensitive, thoughtful, sweet-natured, intelligent.

Have these people over! They bring homemade caramel sauce! 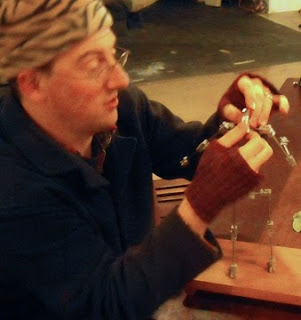 Sven was gripped by the armature Yuji made in Tom B's workshop. 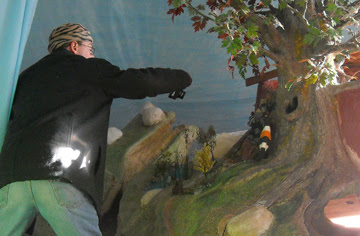 Come again soon, you Darling Lovebirds!
Posted by Shelley Noble at 12:15 AM 6 comments: