The Birds in Hats Are Fully Here! (and I'm finally satisfied with them.)

Here's what happens, I'm minding my own business when my mind wanders over to a Halfland build problem. How to accomplish this or that. I do NOT have any answers about much of any of it. So, my mind is chewing on some part of it--or more often, my HANDS pick something up WITHOUT my mind and starts to do things to it. I'm watching confused as it's generally new, with unknown materials.

Then I suddenly catch on and get excited. Son of a gun. So that's how I can do such in such! Then I immediately feel chagrin over having thought of this new solution. I become a pigeon to my own excitement. The next thing I know, a week has passed and I've worked hard everyday, solving each problem as it appears on the project, and voila! A new blog post about it. This time, it's Halfland's Birds in Hats!

I found the hide glue, normally used for chair caning repair at a local cane supply shop in town. It was expensive for me and something I'd never seen before but my intuition told me it was something to have. In order to see what it was, I put a thin smear on layers of heavy kraft paper scraps and let it dry well. The result surprised me in that it was extremely tough, almost like thick rawhide itself. It was interesting. (I loved it so much I Googled it to see whether it was toxic. From what I found, it is not. MSDS for hide glue states in part that,  "Hide glue is an albumen of animal connective tissue and therefore biologically degradable." "The main components are water and glutin, a scleroprotein.") Probably good practice to wear a glove in case a skin reaction develops suddenly, but for how I got only small amounts on my fingers for such a short amount of time I felt comfortable with it. And it washes off hands, brushes, and tools cleanly with just plain water.

I decided to construct the Birds in Hats by making two hard shells for the body and head, like miniature coconut shells with small scale paper mache, alternating kraft paper and newsprint, and the hide glue. It worked incredibly well, iron tough. The desired forms had to take on a lot of internal infrastructure without losing their shape. 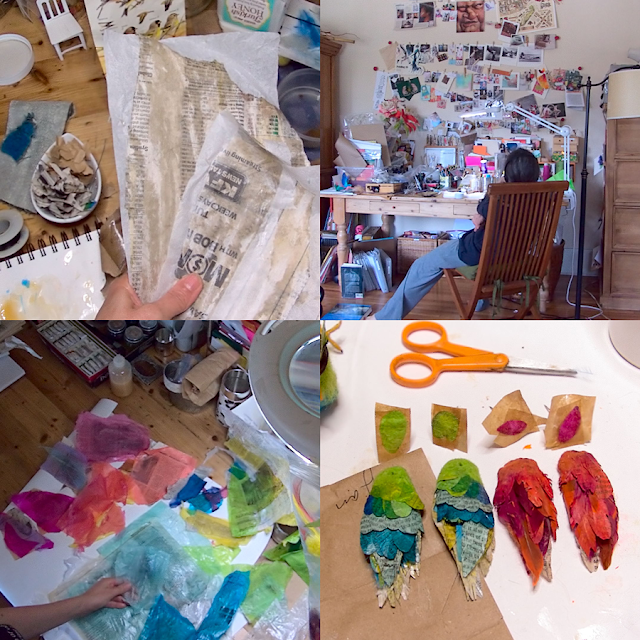 My hands also brushed newsprint with the hide glue and laminated it to plain tissue paper and let dry (upper left) The resulting sheets were wonderfully CRISP and lightweight. They screamed to be used for the Bird's feathers. Loose shapes were used, at first in white and then later made by the bushel by layering colored tissues to make the wings. I spent a lot of time figuring out how to resolve mechanical issues while sitting at my work table in the living room (upper right). The still wings were made and are secured to the puppets via hearty small t-pins topped by small feather pieces to help blend them in when attached.
I had been trying to sort out the Birds in Hats flight wing problem for a very long time. I made a decision about 5 years ago to drop any notion of imitating the real movement of bird wings in flight. Instead I wanted an impression of how their wings look to my eyes in life with a motion blur.

I tried many different materials to simulate the effect finally settling on natural cotton glued to flight wing shadow shapes attached to brass rods that can be rolled between thumb and fingers to rotate into a suggestion of flight.

Later they evolved into having splayed paper feather shapes in a dual-ended wing set idea. I used a spiral cradle in the bodies to allow me to (hopefully) inset the flight wings when they are up in the air and to remove them from place to add the still or closed wings when the Birds will be resting on Answer Tree's branches. There will be some body movement so will have to see how it looks and work around any flaws.

Above is a brief clip of the finished pink and orange Bird's flight wings in action, so get what I'm going for during filming.

Bug Me a Little!

Wanted to test Jeff Gatesman's instructions* to me while it was still fresh in my mind. Took the week to put final pre-shot touches to the bug party, set up the camera on Dick Kaneshiro's Smooth Mover, used a small LED as a moving keylight and started getting a feel for how the bug puppets would like to move.

They are NOT fully fledged stop motion puppets and are not meant to be. The whole bug party sequence is meant as an appetizer for other more meaningful scenes with main characters. And in the clip, I just fiddled with no video assist, no preview, no Lunchbox, no onion skin software, just the camera. I didn't measure the pan and am using the random key light to add an atmosphere layer to the scene.

I've crammed myself in this room with the full main set up and the foreground pieces for the bug party for over a year in an attempt to force me to start to shoot. Didn't work at all. And ironically, I might move the bug party set component to another table so I can get further back. The test above is too close up. I'd like the viewer further back as if peeking at the goings on. Plus, I think it will look more interesting/convincing if these little puppets are just animated without a lot of detail. It's all in the concept in this case.

Tomorrow I'd like to show you the set up and how it finally got down to brass tacks.

Jeff's instructions worked flawlessly and I understood everything. I even used Adobe Premiere Pro for the first time and found it the easiest editing software I used yet. Even easier than using the newish Photoshop animation features that I thought might be better for me.

*I have shared Jeff's suggested workflow with you, fellow animators, in the Underground for those who may like to check the approach out for themselves.