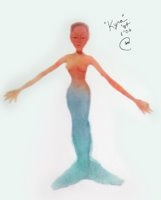 (Action starts on the ground.)
--Film 1--
scene 1:
(Landscape--Sunny Shore--Live Action/Rod Puppet--fade up from white)
The camera startles Kyra meditating on a large rock; she looks deeply into us, pursing her mouth making the sound "Poeh" as she exhales. She smiles and slips gracefully under the waves.
(fade to black)
scene 2:
(Underwater Set and Photographic Composite/Stop Motion--fade up from black)
Camera POV submerges under and we can just make out Kyra's figure swimming quickly away into the darkness, we follow. She finds an old wooden door that leads inside an underwater rock; opening the door she grabs a silver rope floating there and we are taken along as she is pulled swiftly inside the darkness.
(fade to black)
scene 3:
(Surface of Ocean/Live Action/Rod Puppet/Composite--fade up from black)
We emerge with Kyra in another world's ocean. We swim after Kyra towards the land ahead.
(fade to black)
scene 4:
(Underwater Set/Stop Motion--fade up from black)
We follow on land as Kyra's swims through stream waters moving through woodland until we see a cottage on a hill ahead. We see something darting in the shadows of the tree branches as we go.
(fade to black)

--Film 2--
scene 1:
(Exterior--Cottage Set-Afternoon--fade up from black)
We approach the cottage on a green hill, intro Rana on her hands and knees on the cottage's porch trying to coax a tiny writing mouse from a hollow in the tree. We see the hind legs of a goat under her skirting and assume it's a goat in clothes until she rises off the ground, unaware of pulling a spider web onto herself as if jewelry, to reveal she is in fact an old motherly wise woman with a twinkle in her eyes.
(fade to black)
scene 2:
(Exterior--Cottage/Woodland Set-Afternoon--fade up from black)
Kyra calls to Rana from the stream shore; Rana greets and welcomes Kyra from the porch; she picks up the rain water barrel at her front door and walks down the walkway through her yard toward the stream; we see a chicken painting in the yard, queen bees and handicapped butterflies buzzing through teacup roses, When Rana reaches the stream we see the time frog half submerged in the water. Rana collects Kyra in the barrel and returns to her cottage.
(fade to black)
scene 3:
(Interior--Cottage Set-Late Afternoon--fade up from black)
Rana enters her cottage placing Kyra, still in the water barrel, down by the over-stuffed easy chair with the snoring cat, Bosq, as she moves to stoke a warm fire in the hearth. Above their heads we hear tiny birds making a ruckus in a lower tree branch inside the cottage as they fuss over decorating their fancy feathered hats. As we are looking up we notice a darting, lithe figure moving through the frame in the canopy of the tree several times. We see the delighted face of Yanu, the moth-man hunter smiling down on us through the open spaces in the cottage roof.
(fade to black)
scene 4:
(Interior--Cottage Set-Dusk into Night--fade up from black)
Rana continues to prepare a meal of soup and herbal tea for herself and Kyra to share, there are wool colors to sort by the fire. As it darkness, the candles are lit and Yanu laughs as Rana makes her way into her cozy bed. As she closes the shutters we see a pink snail with a fully furnished house on her back move through the garden leaving a shiny silver trail as she travels on the grass. We watch a moment as the snail's front porch lantern rocks slowly to and fro as she lumbers into night. Rana snuggles into her comfy bed stuffed with cattail down and hay. Her pillow, a cloth caterpillar, inches closer to her like a warm hug. We hear rain fall and all is quiet.
(fade to black) 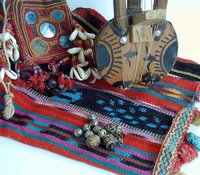 --Film 3--
scene 1:
(Interior--Cottage Set-Morning--fade in from black)
Rana, Kyra, and Yanu awake to the clamoring of the half tortoise and hare, Torhar, being ridden by a darkly dressed, wounded woman, Tarn, with one womanly arm and one black raven's wing, a large beak hiding half of her face. She climbs off of the tortoise shell saddle on the hare, bridled as a horse might be, and stumbles through the cottage door and collapses onto the floor. The birds stop singing and we hear glass shatter and fall and babies cry.
(fade to black)
scene 2:
(Interior--Cottage Set-Morning--fade in from black)
Everyone is alarmed for Tarn's well being and Yanu becomes frustrated with the fact that he can't leave the branches of the tree as Rana tends to her. Rana retrieves a lump of white chalk from her waist pouch and draws a circle around Tarn lying on the wood plank floor. As she completes the circle the scene fades to white.
scene 3:
(Bright Landscape--Desert Sands--fade in from white)
We, along with Rana, Kyra still in her barrel, and an unconscious Tarn appear in the middle of a sea of sand. We see a bit away the lone camp of a half man/half serpent musician, Urhu, playing an ancient string instrument. He greets the band as they make their ways to his camp. As Rana indicates what the distress is, Urhu seems to understand what can make it right. Stocks and shoots begin to emerge from the top of his head and they begin to bloom into living flowers. We can even make out their resemblance to human figures. Tarn awakens at this and these stocks begin to grow up through her hair as well.
(fade to white)
scene 4:
(Landscape--Desert Sands--fade up from white)
Rana and the band of main characters watch in awe from Urhu's desert tent and woven carpet in the endless sea of sand as Tarn lifts into the air slowly, shedding her black heavy wings and beak. They fall to the ground. The flowers of her thoughts continue to bloom and begin to cover her entire body as she rises higher still.
(Action ends in the sky--fade to white)

Twelve scenes total: one minute each scene: twelve minutes total running time. And you thought I couldn't do math!

No dialog, no vocals for any character, with the exception of sighs and special exhalations sounds as punctuation to the action. There will be background music, likely classical chamber music for violins and cello, something Peter and the Wolfie. (There is a radio ad out right now for SBC Yellow Pages that has a storybook piece that would be precisely what I'd like for this, but alas I haven't been able to unearth the name of it.) There will be many layers of sound and sound effect; buzzing bee, wind, rain, birdsong, baby's cry, laughter, glass breaking, crackling fire, etc., which will not necessarily match the action. More of a symbolic soundscape.

Rana's ethnicity isn't specified by time or specific culture. It is Folk, which evokes the same feelings for me in every peasant life from ancient Greek to East Indian to Asian artisan, et al.
Posted by Shelley Noble at 2:13 AM