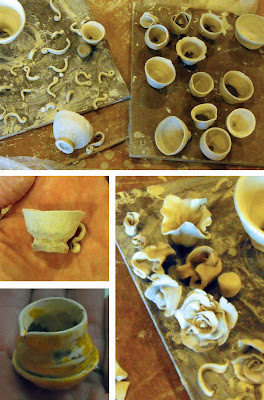 I had a little time left on a gift of time at a ceramic studio in town. I decided to use it to throw tiny teacup props for the cottage teacup rose bush. Throwing pottery this small on a wheel is tricky. The best way is to center a large mountain of clay and then to keep shaping the little vessels off the top. I am not good at throwing pots but in this case it didn't matter because the cups should look a bit organic and the ones I collapsed and ruined were turned into "growing" shapes that could look like roses blooming into cups. (That's my story and I'm sticking with it.)

I even used the same clay to shape realistic roses so that the rose bush will have all sorts of roses in various states of being flowers and teacups in various sizes. Tiny worm-like handles for the cups were shaped by hand to be added later. After the clay was leather hard, I trimmed and sculpted the heavy bottoms into little cup feet. Lower left shows a mini honey pot for Rana's table.

These are being bisque fired this week and will be glazed pure white this weekend for their second, glaze firing. When done, the stretching bush with the roses and cups blooming on it will grow right through the cottage bay window near where Rana is serving tea. I think I'll have her reach up and pick a cup to serve her guest.

Paul made these wonderful things with his time there. (My proper bowl broke during the last firing).
Posted by Shelley Noble at 2:07 AM